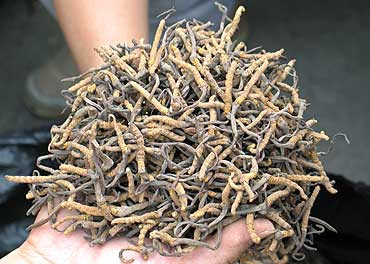 Could Yarchagumba be our next Pashmina?
Healthexpress.co.uk states ”Impotent men are willing to pay $800 for the entombed worms that grow naturally in the mountains of Nepal. Thomas Leung, owner of Kamwo, a Chinese herbal pharmacy, said: “It is hard to come by, and the demand for it is very high because of there’s a lot of hype.” Leung says he is baffled by the amount that westerners are willing to pay for the plant. He said: “People always ask, ‘Is it really that good?’ And I say, ‘It’s not $800 good’”. The plant can be taken in the form of a tea.”
Demand for yarsagumba is so high that in Nepal there have been cases of fighting over the plant. Last year a court case began in which a whole village was arrested on suspicion of murder; the seven men who died had been outsiders, and had been picking the fungus.
Anyone tried it?
Source