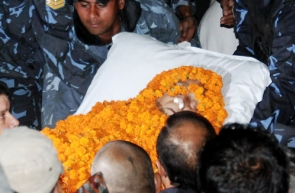 87 Year old Krisha Prasad Bhattarai, the last surviving founder of Nepali Congress and ex-PM passed away just before midnight on the 4th March 2010 due to multiple-organ failure. Here’s few bullet points on his glorious life:
• In his youth, Bhattarai was a journalist. He was one of the first foreign journalists to interview the General Secretary of the Communist Party of the then USSR, Khrushchev.• During the political movement of 1950 to overthrow the Rana autocracy, initiated by the Bairgania Conference of the Nepali Congress on 26–27 September 1950, he was in charge of armed group Congress Mukti Sena fighting in Gorkha district.• After the first parliamentary election of 1959, at the age of 36, he became Speaker of lower house of parliament, though he was not an elected member. After the coup of 1960, Bhattarai was held without trial for eight years at the Sundarijal Military detention Camp.• Bhattarai was nominated as the officiating President of the Nepali Congress on February 12, 1976 by then party supremo Jananayak BP Koirala.• Bhattarai was the Prime Minister of the Interim Government after the successful movement of 1990.• He was elected President of the Nepali Congress by the Eighth National Conference of the Nepali Congress, held in January 1992.• He was prime minister when constitution (1990) of Nepal was promulgated and successfully held the first multi-party election in 30 years.• He again served as Prime Minister from May 1999 to March 2000.• Bhattarai was life-long bachelor.• His position supporting the monarchy and inactivity in political movement that brought down the government headed by then king Gyanendra, made him increasingly irrelevant than controversial.
RIP