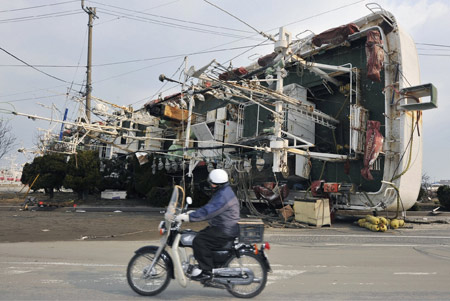 Japan was rocked by a major earthquake on Friday 11th March 2011. 8.9 on richter scale, one of the deadliest the Japanese have seen… followed up by a catastrophic tsunami. 10,000 and more are either dead or missing. Towns and small cities have been swept away. It is truly sad, twitter is buzzing with with #prayersforjapan #japan being the current trending topics and facebook is silently mourning the death of thousands in Japan and the affected areas.
Unsurprisingly, many have linked this natural disaster to the 2012 – End of the world ”hoohaa” which I do not believe. Natural calamities such as earthquakes, volcanic eruptions and a whole lot of unpredictable things have been happening in the past and will continue to happen. They will probably become more disastrous but I simply find it absurd to link that with 2012 and if you want a reason then I’ll give you a sillier reason – my degree only finishes in 2013 so its just impossible… Arko reasion chahiyo??… I heard Rajnikanth has a movie coming out in 2013 😛
Now with Japan, things we can learn… few out of many are – earthquakes are almost never predictable, though we can prepare for them. AND to be grateful… to be grateful that some of us can afford to be picky, to be grateful we live in a place where there’s running tap water, to be grateful to be ALIVE.
Here goes my famous line; Life is long for some, short for others and unpredictable for many. Let each day and moment become a celebration for us…
Jindagi Ko Ke Bhara Cha Ra? And Celebrating today is Jharana Bajracharya who has turned 30. I managed to catch up with the dusky belle who is celebrating with friends in Pokhara.
#prayersforjapan
#weonlyliveonce