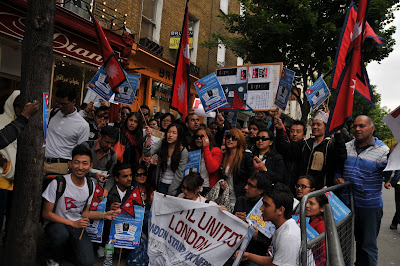 Nepal Unites – London; for Constitution, Peace and Country
Nepal Unites; a social movement that began on Facebook where frustrated Nepali youths united to speak up, stand up against the current government demanding a timely constitution and co-operation from the Government had its first official protest today outside the Embassy of Nepal in London. The program which was slated to begin at 12PM midday had an army of more than 100 protestors chanting, singing and simply; raising their voices.
Lex Limbu, one of the initiators of this protest started the program with his very short speech by thanking the crowd for their time and emphasizing on the fact that this was indeed a citizen’s movement and not a political movement. Furthermore, this was reiterated by Miss UK Nepal 2010 Nabina Gurung who spoke regarding what demands should be addressed by the upcoming constitution. Gurung, further added that the constitution should address the immense diversity of the country and was heavily applauded for her speech. Several other key figures in the Nepali society in Britain voiced their opinions regarding youth, politics and Nepal. The speech program was ultimately drawn to an end by Pradeep Kumar Singh (organizer) who read out the key points from the letter to speaker of CA before submitting it to the Ambassador of Nepal for UK.
Amidst the mass, several enthusiasts recited poetry and sang songs which definitely did unite the Nepalis there. The official protest program came to an end at 2.15PM when Pradeep Kumar Singh, Lex Limbu, and Nabina Gurung accompanied with two photographers made their way to the embassy to hand over the letter to Speaker of CA via Dr Suresh Chandra Chalise, current ambassador of Nepal for UK. The three youths spoke roughly for 20 minutes with the ambassador regarding the theme of the protest program and the submitted letter. Dr Chalise acknowledged that this was a great initiative overseas and promised to convey the demands in the letter to the Speaker of CA in Nepal. He was also submitted with the petition signed by hundreds of participants for government of Nepal demanding to draft constitution on time and move ahead for peace and political stability in the country.
***
I’m sure everyone’s wondering what’s my personal take on today, well that you shall find out in a few months time on Navyaata. Like I mentioned before I dont believe in friendship, I just believe there are people you hang out with – it was a bitter surprise to not see the people I hang around with there today however the presence of my Facebook and Twitter friends made it worthwhile.
Also, I officially have a new answer for what’s your proudest moment. It would have to be holding the banner alongside Pradeep and Nabina as we crossed the road and walked towards the Embassy beside police escort.
Thank you to everyone who came.

Lex Limbuhttps://lexlimbu.com
Lex Limbu is a non-resident Nepali blogger based in the UK. YouTube videos is where he started initially followed by blogging. Join him on Facebook and follow him on Twitter.
Previous articleNepali Celebs in Sri Lanka!
Next articleNew Heroine Left Filmless!!!