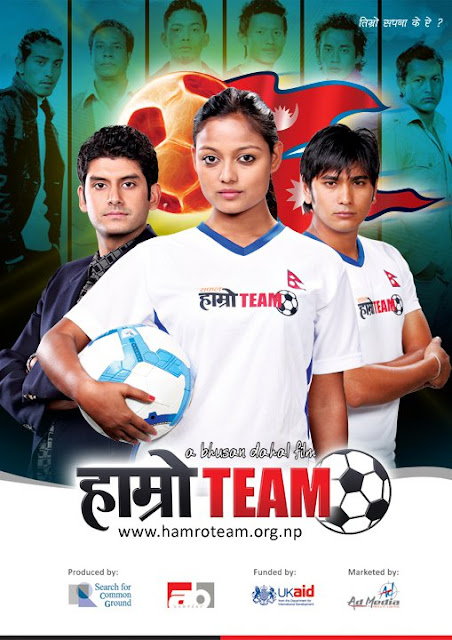 You’ve probably watched it already but here you have the chance to catch up with the HAMRO TEAM episodes online thanks to their Official YouTube channel. Kya ramro, hamii bideshma baseko Nepali harulaii katii sukha bhayo yo bewasthale! The second episode screened on Kantipur TV yesterday (Thursday)

I’ve seen the first and second episode and I loved it. Football isn’t something that holds great interest for me but Hamro Team is well made, well acted and so far is worth a watch. Twas my first time watching Reecha Sharma act and she’s got the ‘act’ and Eelum Dixit ta bhannai parena, I like his ‘halka’ alchi parale bolne style, it kinda reminds me of the way Aryan Sigdel speaks. All in good gist though.
What I would say to the actors and actresses is – maintain.maintain.maintain. Just because Hamro Team becomes a hit doesn’t mean you should stuff yourself up at Thamel or Jhamel; watch your weight. We do not want to see double chins in a months time, a fine balance between meat and bones is good. I think there’s far too many over-healthy looking actors and actresses in Nepal. Naam chai ailee na bhanum hola,
HAPPY WATCHING.