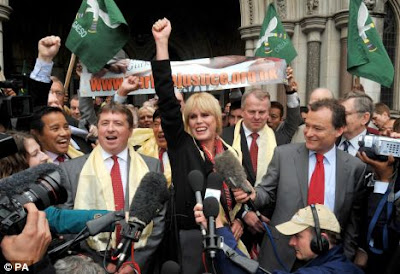 Now as a blogger with a lot of people reading from England and having a dad who is an ex-Gurkha it’s very tricky for me to give my opinions on this issue. I always have to think of the wider public here. Joanna Lumley’s Gurkha Justice campaign was successful in granting residential rights to Gurkha’s who retired before 1997 which has undoubtedly made life a bit difficult for the original residents of Aldershot (so some claim). Now being ”multicultural” is something that UK boasts of, however the reaction from Gerald Howarth an MP who represents Aldershot and Farnborough in parliament is not too kind. Howarth’s most recent comment where he said ”There needs to be policy of dispersal (of the Gurkhas)” has once again outraged many Gurkha veterans and supporters who believe they have every right just like an average British person.
A protest organized for the 1st of October by activists from Aldershot and Farnborough has been called off due to fear that it would be hijacked by the wrong people. ”Lumleys Legacy” is a Facebook group which is quickly gaining a large following online claiming itself not to be a racist group (I’m observing and it’s not). The group statement describes ‘it’s problems are not with the Nepalese people themselves but the Government and the fact that they never prepared the infrastructure or supplied more money for the area’ which has a large concentration of Nepalese people. Their aim is to work with the Nepalese community leaders. Now I don’t exactly know what ‘work’ would entail but the want to establish civil communication at this level is already a positive thing.
Various members on the group have expressed their discomfort in seeing elderly Gurkhas peeing on the streets and have talked about the growing friction between the Nepali and English youths in the area. This is very much true and is something which we Nepalis need to address. On my recent Jet Airways flight from Kathmandu to London I noticed an elderly couple… a Gurkha couple. It must have been their first time travelling to UK because through my observation I could see the journey being a struggle for them. The minimal English which the man knew didn’t do the couple any favor as the air steward would rudely attend to them. Now even my parents struggle with technology and English but they’re still at an age where they’re learning and have that capacity to pick things up but the couple I saw looked like they were  past 60. I’m confident in saying that the Gurkha Justice campaign in some ways sold the ‘British Dream’ in a flattering light and this is surely one of the many factors behind their move.
This growing discomfort isn’t helped by the Nepalese community. The original residents of the Rushmoor area blame the lack of integration between the Nepali and British community and I can relate with that. Reports of Nepali youths being thrashed by English youths is not new and to balance this out, reports of Nepali youths being arrested for petty crimes is slowly becoming all too common. You don’t see many English and Nepali youths hanging out together, more so there’s a whole different level of division between Nepalis (think of all the caste focused events – seriously where have we lost our ‘Being Nepali’ ethos?).
MP Howarth maybe using the Gurkhas situation to sway public opinion to gain more votes and a larger budget. However, it is high time that he presents a solution regarding the ”overwhelming number of Gurkhas” before he presents himself to the media brash and antagonistic views which not only offend Gurkhas but give the wrong sort of publicity to the good name of hardworking Gurkhas and other Nepalese people. As I think of Indian, Bangladeshi and Pakistani communities, I am sure they too had their struggle, backlash from wider British society and their beginnings was just as problematic if not more. Since this is the early beginning for the settlement of the Gurkhas, friction is inevitable and more unforeseen problems are yet to arise.
Lets hope that Aldershot will be a lesson for us all.