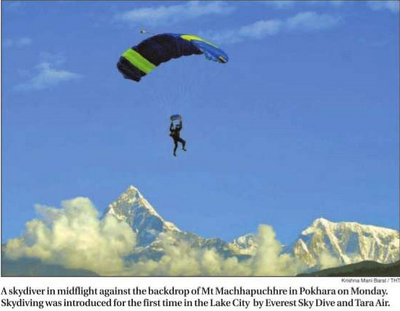 It has finally happened! Commercial skydiving in the Lake City has begun thanks to Avia Club Nepal. According to Republica 40 year old Alexander Havard from England on Sunday became the first person to enjoy the commercial dive jumping at an altitude of 8,000 ft and landing near Khapaudi in Lakeside.
Avia Club which is known for offering ultra-light flights in Pokhara [which is awesome, I did that a long time back] are selling the skydiving trips at Euro 110 per jump. That’s quite cheap, well atleast compared to the dive prices in England.
Sounds fun right?
PS. The photo seen above is from 2010 used in a previous post of mine. The photos from Saturday’s jump will be updated ‘hopefully’ soon.