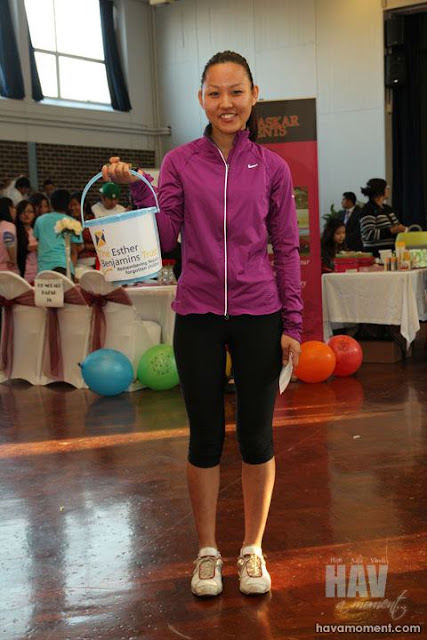 26.2 Miles is not a short distance. That’s the distance of the London Marathon which takes place annually and 21 year old Hong Kong born Treeshna Rai is aiming to complete that distance on the 22nd April of 2012. Being a daughter from a Gurkha family Treeshna who resides in Farnborough always found her-self more enthralled with sports and subsequently that passion developed to long distance running. It was this determination to run that led Treeshna to want to contribute by fundraising money for The Esther Benjamins Trust as well as to do something which she enjoys. Through her constant twitter updates of her training we can confidently say that this 20 year old is far from giving up. To give herself a taste of what to expect, Treeshna will also be running the Brighton Half Marathon on the 19thFebruary 2012. She’s surely pulling no stops when it comes to preparation.
Aside from acknowledging the great achievements by The Esther Benjamins Trust one of the other reasons why Treeshna picked the popular charity was due to it being the only UK based charity that supports and helps Nepal. Though reactions from peers and elders in society have been positive Treeshna admits that she cannot really interest anyone until she crosses that finishing line. Well the wait will surely be worth it but at the present Rai can be proud that she has the backing of Kirat Rai Yayokkha UK for the fundraising where she must raise GBP 642 by the 1st of February 2012. Her ambitious target stands at GBP 1800. She’s currently GBP 1300 away from reaching her goal. Let’s make Treeshna’s goal, our goal. You can donate any amount online via http://www.justgiving.com/treeshnarai or lucky Vodafone users can sponsor via a text UBWK96 £1 (input any amount) to 70070. To find out more about the works of The Esther Benjamins Trust, please follow this link: http://www.ebtrust.org.uk/