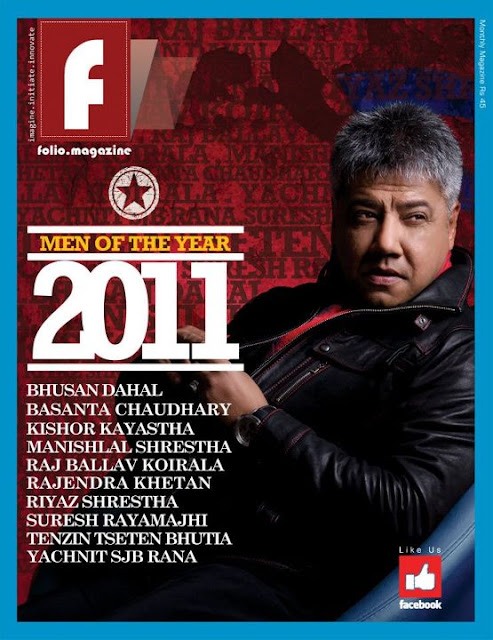 All bias aside!
I’m loving the current cover of Folio Mag, the issue which has aptly been titled ‘Men Of The Year 2011’ features Bhusan Dahal on cover. It’s great to see someone who’s hard working, who deserves to be recognised on the cover. Many may know him for his debut film Kagbeni but Dahal is no stranger in the media circuit. He has produced and stars in many shows on Kantipur Television including GhumGham and Fireside. I hear he started his tv journey way back by hosting some music show. Guess he has come a long way and after seeing Kagbeni, I really do hope he make’s a return to Nepali cinema. Oh and how can one forget ‘Hamro Team‘.

Now regarding the cover, I do not have much to say. It’s simple, effective and works! If you compare the cover of Folio magazines from the first few issues to this one you will automatically see a transformation. Before, there were too many text, too much to read and various colours were thrown at you. This is the way forward. Lovin’ it! And I hear there might be a new addition ‘Nepal’s Most Desirable’? That sounds very interesting!!!

PS. Probably for the first time, popular photographer Kishor Kayastha can be seen in front of the lens as he makes it on the list as well! Great job Kishor!