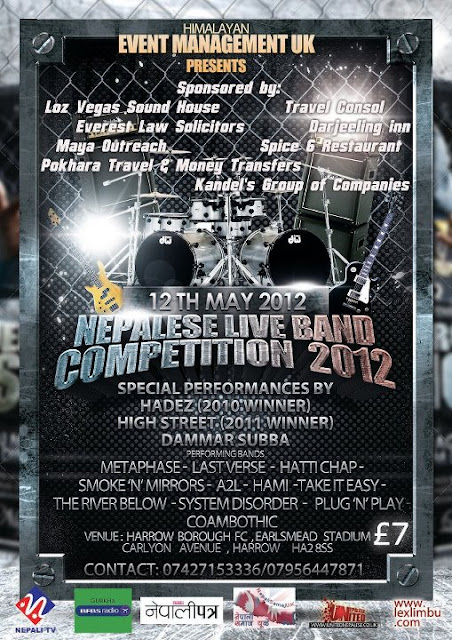 As the days slowly start getting warmer, Nepali events also start increasing day by day in the UK! Nepalese Live Band Competition makes their annual return this 12th of May! The live band competition has been running for four years and has managed to bring out popular Nepali bands of today such as Paper Edge, High Street, Hadez and more!
Interested bands are encouraged to apply now to avoid disappointment as there is a limited slot of only ten spaces! It’s first come first served basis so get contacting the numbers displayed on the poster above. The fifth live band competition has seen quite a few internal changes as it will be organised under Himalayan Event Management for the first time! Key organiser Bhim Limbu who is behind the organisation team boasts of past experiences as a visual and audio assistant for arena-scale shows for musicians such as Shakira. Unlike last year the competition will take place at Harrow Football Club from 12 PM onwards.
The most important part for some! Winning Prize of Nrs 1,00,000 up for grabs!
Apply Now!
Join Lex on Facebook!