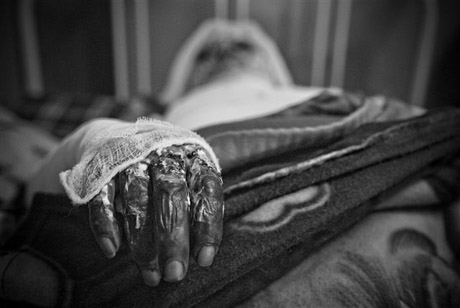 Recent article titled The (mis)management of burn injuries in Nepal reveal shocking statistics regarding burn victims in Nepal and the management of the injured victims by hospitals in Nepal. A Doctor has spoken candidly stating the negligence of burn victims by hospitals due to high cost of the treatment and the low rate of survival. Many hospitals entangle themselves referring patients from one institute to the other, shamelessly.

Traditional thoughts and beliefs also play a huge role in many women lighting themselves on fire or husbands forcibly carrying the act out. Land disputes, affairs, dowry, are only some of the reasons as to why there are an increasing number of burn victims. In rural Nepal many innocently burn themselves in cooking fire. Suicidal burn cases such as the attempt of a Tibetan woman to self-immolate late last year grabbed headlines even though majority of cases are accidental. The most recent news of a man attempting to burn his wife over personal dispute has once again hogged the front page Nepali publications.

According to WHO, Nepal ranks at number one in the list of countries with the highest rate of mortality by fire-related accidents with an estimated 1,700 deaths per year.