Home Showbiz Manisha Koirala Still Searching??
Facebook
Twitter
Pinterest
WhatsApp
Things certainly look a tad bit confusing for actress Manisha Koirala as she was recently tweeting about her hope to meet her soul mate. Now we’re not sure if this is referring to her husband Samrat Dahal or someone else! 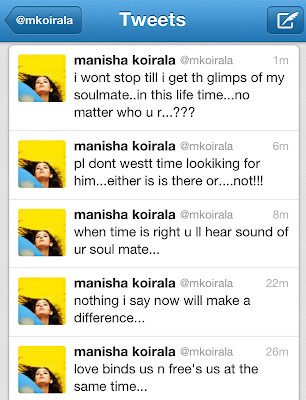 It’s been reported widely in the media that Manisha was seen actively sharing not so positive statuses about her marriage and life on Facebook which led to the actress deactivating her account. Manisha who’s currently embarked on a trip to India in hope to clear her mind, settle her heart and evaluate her life can now be followed closely in the micro-blogging site! Much of everything is reported by the media so her life could very well be far from the picture painted but when the beautiful lady herself is seen tweeting such things publicly it does paint a grim picture.
I cannot imagine what being a celeb is like but I guess everyone deals with things differently! With some in Hollywood having public breakdowns, I wish Manisha all the best, we all do. Though networking is good, sometimes social networking does add fuel to the fire, as in this case. If you haven’t yet then do read ‘A New Earth’ by Eckhart Tolle; an inspiring read for those searching.
Join Lex on Facebook!