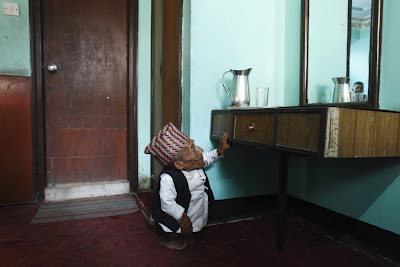 Dangi who hails from a remote village in Dang measures just 22 inches tall. Similarly, Khagendra Thapa Magar also measured to be 22 inches tall so we will have to wait and see if the Guiness World Records team (who are already on their way to Nepal) announce Chandra Bahadur as the smallest man in the world or not. The verification is set to take place on later today! Small or not, hope the man is happy with all that’s surrounding him at the moment.

Actually, I have to say it. I dislike this… it’s as if he’s an animal… an object which everyone is just staring at, wanting to see/meet, measure… Not quite a fan of this practice. Dangi had apparently never left his village prior to this world record hoohha! How do you guys feel?

Check out the video below!