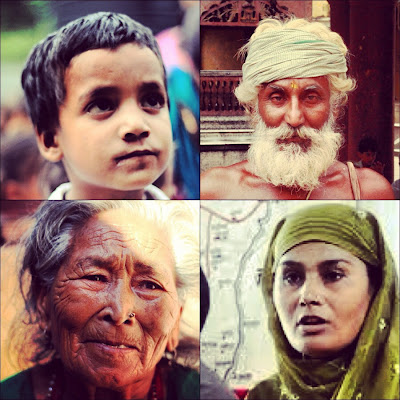 Now being a bideshi Nepali there has been one too many time’s where I’ve heard or been asked the question ‘Abuii Timi Nepali Ho?’ After a voluntary pause my reply always goes along the lines of an awkward ‘ahh ho ni’, but in my head it’s more along the lines of ‘Sankha lageko thiyo bhane kina Angrezi ma nasodheko??’ pure guffadis, I say.

But really, the question I ask today is; what makes a Nepali face? Living in the UK where majority of the Nepalese are from the Mongol Gurkha background we have become so used to seeing sharp oriental features and dare I say… a flat face. That’s been embedded as the image of a ‘Nepali face’ here, at least for some of us. Yes, I too have those features and have no intentions to ignite friction between different people here. For a lot of ‘matwalis’ in the UK, only a ‘matwali’ face is considered ‘Nepali’.  This awkwardness can be experienced in various community events, social gatherings and even between the youth. A moment occurred after leaving a club with a friend who is ‘Upadhyay’. A fellow Gurung friend walked along to pose a question to my company ‘Omygaddd are you Nepali?’ she shrieked tipsily. The one too much vodka must’ve really recharged her as she quickly jumped to answer her own question by adding ‘but you don’t look Nepali’. And yes my Upadhyay friend stood there, looking bemused and confirmed that he is indeed Nepali.

So there you have an account from a ‘matwali’ side. Now let me take you to Berlin. A recent drive I had to Germany was wonderful. I joke, it wasn’t. More than seeing sights I was stuffed in the car being a human navigator and whatever I saw outside the window was of no significance to me. Berlin, the capital city of Germany failed to live up to my minimal imagination. Actually, I lied… I had no imagination or expectation from the city whatsoever but it still didn’t Lexcite me. Moving on. Whilst waiting for the train at Hardenbergplatz it came to my attention that I could hear some Nepali chatter. I made myself available and walked along to greet my first ever German Nepalis. My approach was met with the daunting question ‘Tapai Nepali ho?’… No way homie!!! For obvious reasons, I didn’t say that and by now you’ve probably gathered that my new German Nepali encounters were not ‘matwali’. How interesting right? So for them the image of a Nepali face is constructed on Aryan features. Wow… London to Berlin, only few hours apart but our ideas were already poles apart.

K… Kkkk… Kathmandu. Now what do I say about this city. I feel comfortable… I feel fine and know I’m very much Nepali and surrounded by Nepalis but the moment I step into a Government office = WHOOSH. The feeling of being a foreigner in my own country hits. And it certainly hits hard. I guess this feeling that I have is felt even more by certain groups of people in a more public sphere of space in the city. Example Uno! The dai’s and bhai’s that sell chatpatey in the capital have it worse. We as people… as Nepalis are still failing to acknowledge that people of Madhesi origin are Nepali. When one thinks on the surface, you can totally see why the Madhesi uprising took place a few years ago.
So I may have babbled, offended or opened your eyes. Or you might currently be cursing me for wasting your few minutes that you could have spent viewing some model in an awkward pose but I simply wrote this article as I believe there is not a ‘Nepali face’. How can there be a ‘Nepali face’ that represents our char jaat chattish barna? Though it may take years I have faith that one day people with Tharu features or the groups from the hidden villages of Solu get acknowledged as a Nepali and comments such as ‘oh ho kasto Chinese haru jasto manche’ or ‘tapai haru India bata ayeko ho’ slowly fade away.
PS. The debate regarding is it char jaat chattish barna or char barna chattish jaat is like never ending. Let me know your thoughts below
Join Lex on Facebook!
Read Also:
Will I Go Back?
Being Nepali

Lex Limbuhttps://lexlimbu.com
Lex Limbu is a non-resident Nepali blogger based in the UK. YouTube videos is where he started initially followed by blogging. Join him on Facebook and follow him on Twitter.
Previous articleParcha Productions BIG NITE – APRIL 3RD!
Next articleMalvika Subba on WEDDING BELLS