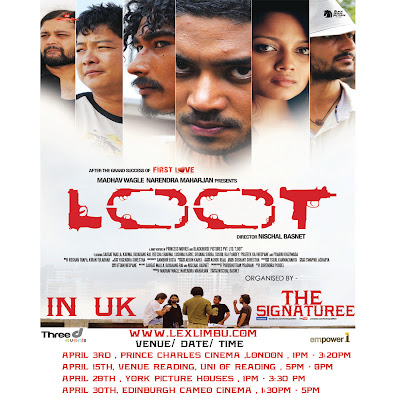 With only two screenings down The Signaturee have ambitiously unveiled dates for another four screenings of the blockbuster that is LOOT in the UK! The film that first screened in Aldershot to a packed Princes Hall will next be screened in Ashford in hope to draw crowds from Folkestone, Ashford and Maidstone. Mixed feedback on the venue for the London screening was heard and has been acted upon by organisers as now the second screening in London will take place at the Prince Charles Cinema in London right in the heart, the very vibrant West End district! Expect the best! Organisers Signaturee who are on a mission to cater to all will also screen the movie in Reading, York and EDINBURGH all the way up north in Scotland.

Reality check! Many film makers and enthusiasts who might be thinking wahh Nepali film UK ma chaldo raicha, do think twice! LOOT worked well because LOOT worked well in Nepal and created somewhat of a hurricane amongst the Nepalis abroad as well. That’s why the film has become unstoppable, thus it’s more convenient to convince people to watch the film.

Lex Limbuhttps://lexlimbu.com
Lex Limbu is a non-resident Nepali blogger based in the UK. YouTube videos is where he started initially followed by blogging. Join him on Facebook and follow him on Twitter.
Previous articleStudent Life by RAPOHOLIC
Next articleQuote Of The Day