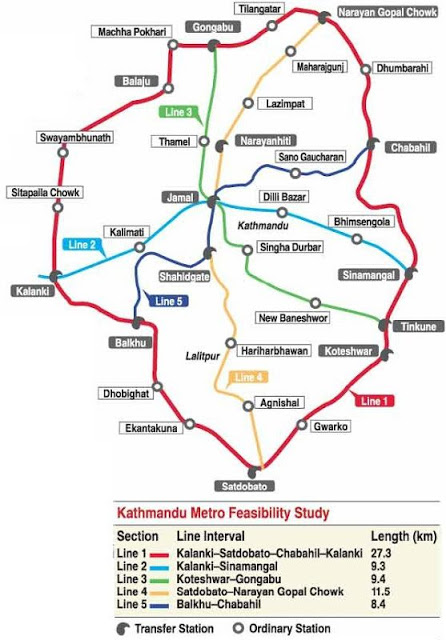 Recently, a report on metro railway in Kathmandu has been submitted to the Department of Railway by the consulting companies, well I for one was not aware that Nepal had a department of railways. Guess one learns a thing or two each day. As seen from the map above, the plan includes 5 lines which will stretch over 66km including 31 stations. Whilst four lines will connect various centres of the outskirts to the inner city, one will act as a ring road and be a circular route.
Reality is, Kathmandu is a city that till today does not have public transportation in the evening. Even taxis dry up after 8PM. One finds it quite difficult to get a cab beyond Thamel or Durbar Marg! And we have such extravagant plans to bring a metro railway? The Kathmandu Metropolitan City does have plans to launch night bus service in the capital after the Nepali new year under a three month trial where four buses are set to hit the streets between 8PM to 11PM. Now that’s a good move but still it could go terribly wrong if numbers of passengers are low.
Before submitting more reports, we should really pause and maybe think of ways to improve what we already have. The unstoppable road expansion drive may be going very well so rather than jumping on to such ideas the government should think of better ways to manage traffic in the city, maybe give the roads in major parts of the city a facelift and fill the potholes. Not to forget the broken footpaths in some areas of the city. Hmmm… More than all of this, I would like the government to be more speedy on the Kathmandu-Terai fast track! That’s one project which I have been eagerly waiting for it to ‘happen’. If that makes an impressive progress then wait for it, MAYBE (a big MAYBE) work for the second international airport in Nijgadh may start.
PS. I’m more game for the mid-hill highway project than this but what is your view?
Join Lex on Facebook!
Read Also:
Thulo Bato Coming Soon