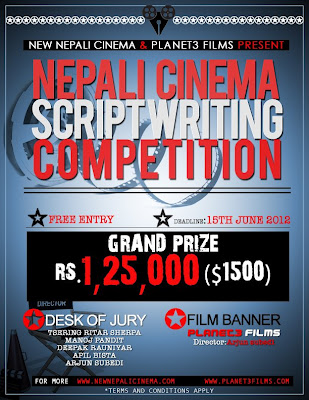 Fellow writers who take a keen interest in developing their own stories or even script writing, this new competition launched by New Nepali Cinema and Planet3 Films is so right for you!

Everyone is free to submit their stories by the 30th April 2012, to state it boldly here it’s free entry and the final full script needs to be submitted by the 15th June 2012. The winning script will receive a grand prize of Nrs 1,25,000 or $1500. Pretty impressive aye? And if you were wondering if this is another pointless competition where you become a mere title winner then you might be surprised to know that the script will in fact be made under the production of Planet3 Films by Arjun Subedi from 2013!

Judging your stories will be a team of five, ranging from film-makers to enthusiasts including the director of Chaukath and Highway, Deepak Rauniyar and your very own upcoming cinema director who will be using the winning script, Arjun Subedi.

If you’re up for the challenge then you can find more info on here.

UPDATE: The story submission deadline has been extended till the 7th May so hurry up and get your writing sent in. So far there have been more than 65 entries submitted online

Planet3films is an independent film making company established for developing professional cinemas. It has already created a warm space in Nepali Cinema arena with beautiful short films and music videos. This company believes on meaningful films, music videos, and create awareness and provide entertainment through their work. Arjun Subedi will be directing the resulted script.

Lex Limbuhttps://lexlimbu.com
Lex Limbu is a non-resident Nepali blogger based in the UK. YouTube videos is where he started initially followed by blogging. Join him on Facebook and follow him on Twitter.
Previous articleSiddharth Lama Returning to Malayalam Cinema
Next articleSnow Leopard Captured on Camera