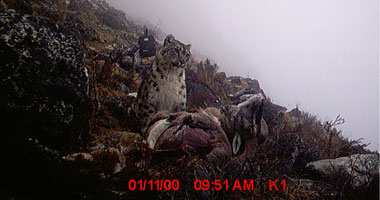 Check out this image captured of an endangered snow leopard in Taplejung. I believe this was captured very recently as it only surfaced on Republica earlier today. WWF estimates that Nepal currently has approximately 350-500 snow leopards in Nepal with the districts of Mustang, Mugu, Dolpo and Humla being the main habitat for this rare animal.


With an international campaign to double the tiger population worldwide by 2022 underway let us continuously create awareness in the communities needed so these animals can safely live in their habitat without being disturbed. Estimated number of tigers in Nepal was between 340-350 from the survey conducted in 1990-2000, however that had dropped to 121 in 2009-2010. But the good news is that the most recent survey has found that there is in fact 155 tigers in Nepal, now that is 5% of world population. All these figures have been taken from the sources linked below.