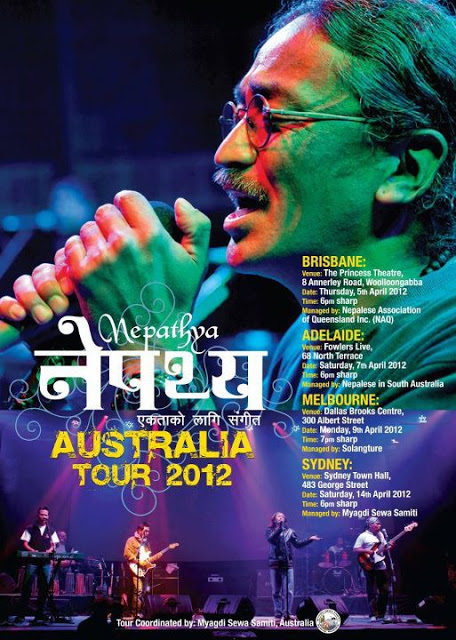 How many times have you sung Resham whilst playing antakshari or danced your feet off to Tal ko Pani in Nepali parties? I have lost count. Nepathya are one of those rare bands who have successfully managed to fuse cultural beats and rhythms with modern tunes. The best thing is, they are appreciated by all ages. It was quite a bummer to know that talks to bring the band to perform in the UK did not work out last year, however Australia is all set to experience one of the biggest Nepali music extravanganza! I’m sure this will be the biggest event on the Nepalese calendar for music lovers.

Kicking off the tour with the premier show in Brisbane on the 5th April followed by Adelaide on 7th April, Melbourne on 9th April and the final show in Sydney on 14th April, this event is expected to draw thousands across the country. The Sydney show has already received so much hype as apparently the venue where Nepathya will take the stage is the very same venue where Lady Gaga previously performed an exclusive concert in 2011 promoting her album Born This Way.

Well to those that go, do share how the event is. This is surely an event I would not miss, gotta love the Sa Karnali song by the band. I think I’ll add ‘Go See Nepathya’ on my Things To Do before you die list.