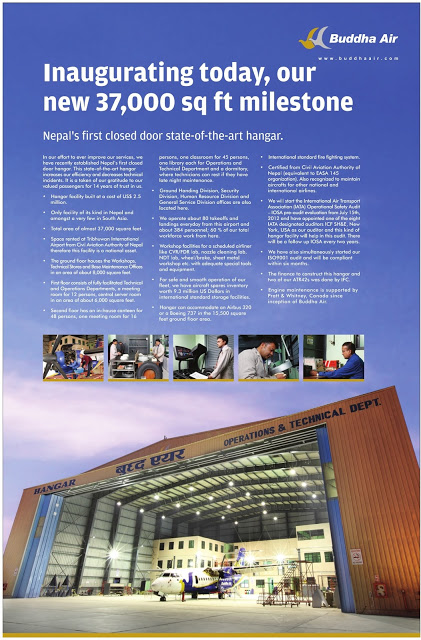 Dont you love a bit of aviation news? No? Oh well, here it is 😛


Nepal’s Buddha Air has recently opened it’s own hangar at Tribhuwan International Airport, the only international airport in the country. Now for the many Nepalis abroad who might be thinking ”so what”, well this is definitely big news as Buddha Air is the only airline aside from the state owned Nepal Airlines to have its own private hangar. This step marks a great high for the airline that has a cool fleet of 10 aircraft and connects Kathmandu to many cities including several international destinations (Varanasi, Lucknow, Paro).


The hangar which was built at a cost of $2.5 Million US dollars and is 37,500 sq feet is big enough to fit an Airbus A320/Boeing 737. At the press meet held recently in the capital, Buddha Air said it will be providing commercial maintenance services to other airlines as well. Even though I was a loyal Yeti Airlines flier, it’s amazing to hear and see such progress made by Nepali businesses. Go Buddha Air!!!