Thanks to LOOT many people are now optimistic about viewing Nepali films as well as investing or screening it abroad. Next up, we have SAAYAD that will be released on the 11TH MAY in Nepal and following that shortly will be the UK screening of the movie which kicks off in Hounslow on Saturday 19TH MAY. Not a bad timing aye? Get the dates added on your phones and book a shift off as Saayad will also be screened in Aldershot and Harrow as well. Screening details below. Oh’ have to say it here, this is directed Suroj Nalbo Subba – BATO MUNIKO PHOOL.

More on the movie – Saayad is a movie that explores and aims to unravel current issues arising amongst teenagers in Kathmandu. The plot is centred around a group college friends and various unfortunate events that occur around them including sex scandal, family betrayal and gang culture. I had the chance to view the movie during it’s trial screening in Nepal last year and have previously written a short ‘Lex Style’ review. Completely honest, of course. You have the pleasure of reading an excerpt below and check out the photo of me alongside the actors and director of the film. Let me repeat here again, Samyam Puri definitely steals the show in Saayad with his emotion packed acting and the ever-so popular comedian Wilson Bikram Rai is a show stealer in the second half of the film.

Lex Reviews: “Acting is brilliant by all the actors; the older bunch which has the likes of Jharana Thapa, Babu Bogati etc. and the younger batch of boys and girls really impress with commendable performances. Out of them Samyam Puri and Wilson Bikram Rai’s performance steal the show in the second half. Just when everything kick’s off and things start taking the turn for the worse Rai’s performance captures the audience, humor and his comic timing is great if not perfect. Similarly, Samyam Puri’s character is definitely put to the challenge which he conquers really well. He certainly has the ‘act’ in an ‘actor’.” 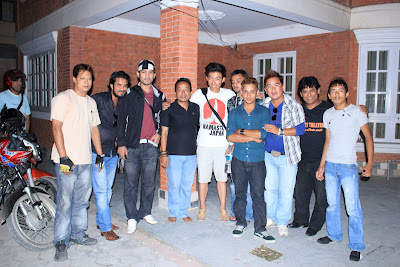 PS. It was this trial screening of SAAYAD where I met Wilson Bikram Rai for the first time. After he made us laugh with few of his live comedy, Prawesh (Lex in Nepal cameraman) and I just new he was too good to miss out on. Then happened his youtube channel and the rest as they say is history.
PS#. Original soundtrack by The Shadows band, sounds super! Check it on youtube!
Join Lex on Facebook!
Read More:
Lex Reviews SAAYAD
Wilson Bikram Rai on YouTube! 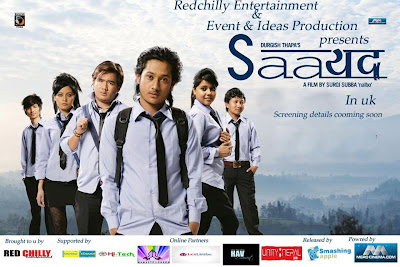