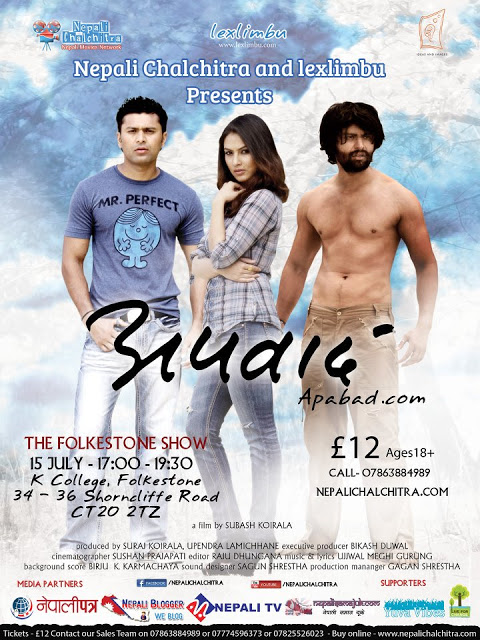 Check out this film review of APABAD written by Pratakshya Bhandari for HamroDallas.com! This is ideal for those who like to know if the movie will be worth their money before forking the cash out of their wallets. APABAD will release all over Nepal on the 15th June and starts it’s UK screenings on the 23rd June from London. The film sounds positive, insightful and inspiring!

Every once in a while, there comes a movie that leaves you spellbound, because it makes you look into places in your heart that you would dare not on your own. It makes you laugh, cry and connects you to a part of yourself that you’re either too busy or too scared to explore. This time, it happens to be a Nepali movie. A very well made Nepali movie indeed.

Apabad, which means to be an exception, is the story of a young man called Suyog and his journey into the unknown which eventually leads him to figuring out his purpose in life. An ironic twist of fate leads him to the destiny that he runs away from, and thus begins the coming of age story of an exception to what society deems normal, who doesn’t even know he is one until he loses everything and is forced to look into himself.

One of the things that peaked my interest even before I watched Apabad was when I read somewhere that the movie is based on the belief that when there is nothing left to burn, you set yourself on fire. It truly is the story of the average Nepali. A story of despair and a lack of belonging that we’ve all felt at some point in our lives. Of course, not all of us go to lengths that Suyog does, in order to find that peace of mind, that sense of serenity. However, he represents the lost generation of Nepali youth, spread around the world looking for a place to belong, because our own country is too caught within itself to help us figure life out.

The movie is inspired. It definitely is. But if you think it was a wasted effort just because it was inspired from a hundred places, try writing a story. I have, and I know that so many times I will write something on paper that I know I’ve heard before, but I can’t help it. My life, and all of our lives have an inspiration somewhere. Storytelling is an art for sure, and not everyone can write great stories. Fewer can present it in a movie screen and bring it to life. Sometimes these will be stories that remind you of your own story. Sometimes, these will remind you of something you heard far far away. Either way, if a movie can tell you a story that you’ve heard a thousand times before and still move something in you, that right there, is a successful movie. And Apabad, to me, is a success in every sense.

Having said that, I think Apabad would have been a measly effort to tell a story if it hadn’t been so well supported on the shoulders of Raj Ballav Koirala. I have to tell you, I am now officially included in the list of Raj Ballav Koirala admirers. This guy is so effortlessly convincing, weather he’s crying or laughing or dancing without a shirt on, every time he comes on screen you forget that you’re watching a Nepali movie. The only other person whose star power can be felt is Rabi Giri, who is equally good if not better in his role as the beaten down father of a clueless son. Nisha Adhikari is overshadowed and can barely make her presense felt, which is ironic because the movie itself is largely based on the relationship between Sunanda and Suyog, played by Nisha and Raj respectively. The only other two characters seen in the movie are the loving mother and a book publicist. I think a few more characters would have added dimensions to the movie.

All in all, a wonderful ride of emotions you do not want to miss for the world. We’ve heard the music and it is exceptional but equally good is the poetry that Subash Koirala wrote. Dark humor that is the soul of the movie, is for those who understand the irony of life; when it is so awful that is funny. For the rest of the world, a decent movie well worth the two hours they’ll spend at the theater.

Check out the trailer below. Many say the film is better then the trailer, hope it’s true.
Catch the London show on the 23RD JUNE, Folkestone on 15TH JULY followed by Aldershot on 20TH JULY.

Lex Limbuhttps://lexlimbu.com
Lex Limbu is a non-resident Nepali blogger based in the UK. YouTube videos is where he started initially followed by blogging. Join him on Facebook and follow him on Twitter.
Previous articleSanyukta Shrestha 2013 Collection
Next articleDinner With Shristi Shrestha in London