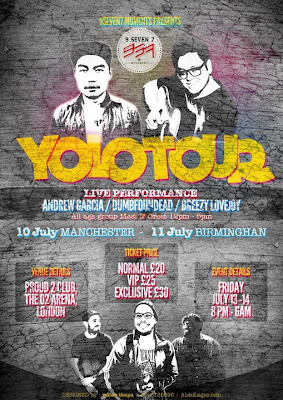 Party-prowlers probably know about the YOLO Tour already! If you don’t then here’s the lowdown. 9Seven7 Movement are bringing over youtube sensation DFD and Andrew Garcia from the US to perform three dates in the UK for the ‘YOLO’ Tour; that my friends is ‘You Only Live Once’. Probably the most used term this year! Eating few days old expired food and saying YOLO, failing an exam and saying YOLO – it seems to be the answer for most things. The tour kicks off in Manchester on 10 July, Birmingham on 11 July and finally comes to London on 13 July.

You can buy standard ticket, VIP ticket and EXCLUSIVE VIP ticket for the event. Little birdy tells me that the VIP tickets for the event has sold out online and can only be bought through few promoters! Selling like hotcakes! This deffo is turning out to be the party of the summer. 2K12 y’all – YOLO! For those that are under 18 and love and have huge respect for DFD and Andrew Garcia you’ll be super glad to know that 9Seven7 Movement have made it possible for Under 18’s to meet the two musicians earlier on during the day. Meet and greet times are listed on the poster below. Did you know that Andrew Garcia was in American Idol in 2010. Garcia went on to the finals before being eliminated after TOP 9. And what can I say about DFD – for his fans even God isn’t DFD. So yeah… sums it up. They’re both super talented and entertaining in their own right. 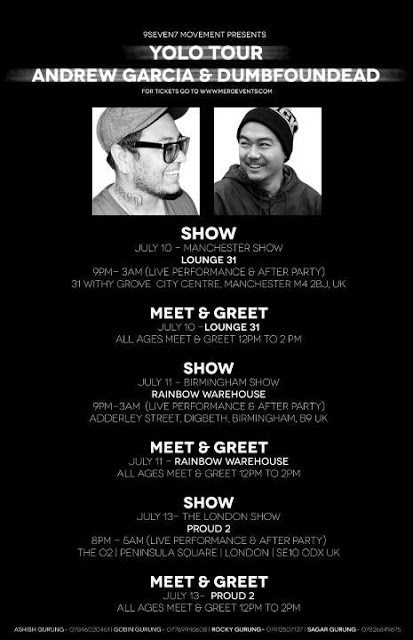 You only live once: that’s the motto nigga YOLO – Drake

What’s your motto?
PS. The track below is dope! Hit PLAY!


Head over to Facebook for more event details – Event Page.
Don’t forget to check out 9Seven7 Movement page for updates!