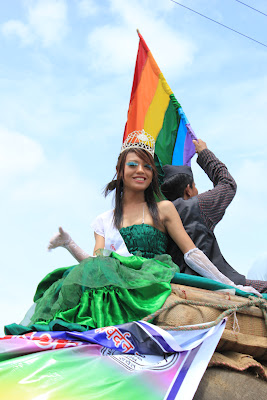 The 3rd International Gaijatra Pride Festival will soon take place in Lakeside, Pokhara on August 3. Blue Diamond Society Nepal have been managing the event since it’s beginning in Kathmandu in 2010. The first pride festival was followed up by the second one last year in Narayangadh. Aside from coming together and coming out of many members of the LGBTI community, the event also holds a candle lit memorial in memory of those LGBTI who have died due to various reasons. In addition to that, this years candle lit ceremony will also be held in honor of the victims of the devastating Seti River flood. You can join in the festival fun by simply observing in Lakeside or walking, dancing and singing with the crowd. It’s quite a spectacle! Below is the video of the Gay Pride event held in Narayangadh.