The countdown to the opening ceremony of London Olympics 2012 is done and dusted; you guys can go ahead and share your views regarding how London fared compared to the extravagant Beijing opening ceremony back in 2008. Well, that is yesterdays news. Let’s focus on the Nepali Olympians Prasiddha Jung Shah and Shreya Dhital, our two swimmers at the Olympics. Twenty-three year old Prasiddha who participated in Beijing Olympics 2008 will be swimming mens 50m freestyle in London on Thursday 2nd August 10AM (GMT). Shah’s personal best is 27.04 seconds for 50m freestyle. The current Olympics record is 21.30 seconds set by Cielo Cesar of Brazil in Beijing 2008. Eeek! Hopefully you’ll be able to beat your best and maybe bag a medal for Nepal Prasiddha. 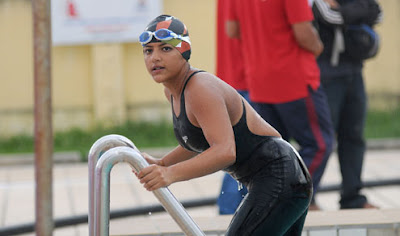 Shreya Dhital is only seventeen years of age and is the youngest Nepali Olympian in the team of five. She will be swimming womens 100m freestyle on Wednesday 1st August at 10AM. The young swimmer is the current national champion of Nepal with the national record on her name. She bagged a total of six gold medals at the Sixth National Games. Way to go Shreya!