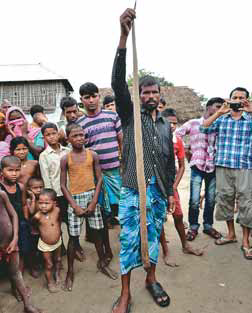 When 55 year old Mohamed Salmo Miya was bitten by a cobra snake (goman) in his field, Miya was so angered by the snake that he did what only few could ever dare to do. Miya chased the snake and bit it to death with his teeth. This incident which took place on Tuesday evening in Bardanga village has already grabbed headlines in Nepal and several international media. Miya defends his action by sharing that he was told by a snake charmer that if a person ever experiences a snake bite then the best option would be to bite it until its dead to save your life. Official authorities will not be pressing charges against him as the snake was not endangered.

Apparently there are approximately 20,000 cases of snake bite every year in Nepal. Yikes! They scare me, petrified!