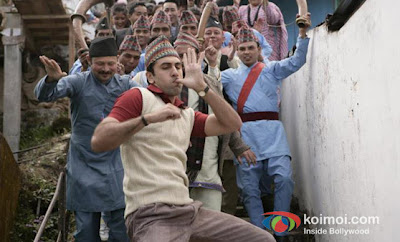 Bollywood film Barfi! which released a week ago on 14th September is luring cine-goers worldwide. The film which has been made with an investment of INR 30 Crores (approx) has already raked in INR 62 Crores worldwide and the film looks set to bring more viewers in judging by the positive word-of-mouth. Powerful performance by all the actors, wonderful songs, fresh locations and a simple story that will touch you are few of the reasons why Barfi is a must-watch. One can probably place bets that Ranbir Kapoor and Priyanka Chopra will be sweeping most of the awards in the coming award season.

Also making his foray into Bollywood is Nepali theatre actor Bhola Raj Sapkota. Bhola plays Barfi’s best friend in the film. The actor who hails from Hetauda is said to be ecstatic about the response that Barfi has collected so far. During a brief interview with merocinema, Bhola shared Barfi would not have been possible if Prashant Rasaily had not made him aware of the audition. Hopefully we’ll see this entertaining actor in many Nepali and Hindi films in the near future.

PS. Barfi is the official Indian selection for the Oscars next year! Kudos, wishing the film the best. Priyanka has floored me! She’s the best actress.