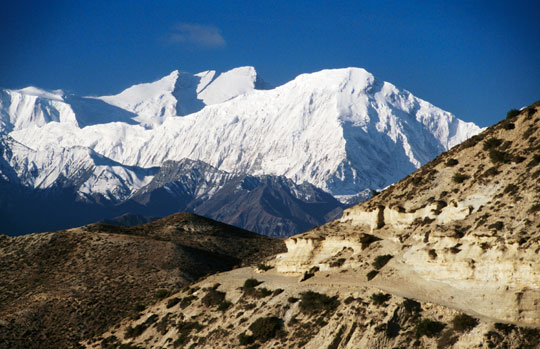 The mystical region of Mustang has made it on the TOP 10 list of Best in Travel 2013 compiled by Lonely Planet. Mustang takes up the third spot after Corsica (France) and The Negev (Israel). Lonely Planet promotes destination Mustang with the tagline “Last chance to see ‘forbidden kingdom’. Adventure enthusiasts have had a long fascination with the hidden region since long ago. Such fascination still exists today. The National Geographic recently did a feature on the Sky Caves of Nepal which was published on their monthly magazine and is also available to view on YouTube.

What Lonely Planet says about Mustang:

The completion of a road connecting Mustang to China in the north and the rest of Nepal to the south will make all the difference to this remote region. Lo Manthang, or Mustang as it’s usually called, has been dubbed ‘little Tibet’ or ‘the last forbidden kingdom’; though politically part of Nepal, in language, culture, climate and geography, it’s Tibet. Until 1992 nobody from outside was allowed in; for a while after that it was opened up to a few hundred a year, and these days anyone can enter, though the pricey trekking permit keeps the numbers down. Expect that to change.

With visitor numbers steadily rising, Nepal remains a tremendous option for budget travellers. After all, the number of countries where you can live on the price of a Starbucks latte or two are diminishing rapidly. Sure, to do that you’ll need to stay in budget accommodation somewhere other than Kathmandu and resolutely stick to simple local food, but many consider this a price worth paying for paying a low price. Though costs rise once you enter national parks, if you’re up for trekking on your own and staying in teahouses, Nepal is not only the best-value spot for Himalayan hiking, it must be a contender for offering the most astonishing rewards for the least upfront investment of anywhere in the world. In fact, this remains true even if you factor in a porter and guide and opt for an organised trek.

The experts have spoken! I guess we all know where to go in 2013.

Lex Limbuhttps://lexlimbu.com
Lex Limbu is a non-resident Nepali blogger based in the UK. YouTube videos is where he started initially followed by blogging. Join him on Facebook and follow him on Twitter.
Previous articleNepali Film Dhanda in UK
Next articleFCUBE Cinema Opens in Kathmandu