Against Gender Violence in London

It has well been over a week since people started protesting outside Baluwatar over women’s safety in Nepal. The case of Sita Rai, a woman returning to Nepal from Saudi Arabia robbed and raped by a government official managed to grab the attention of hundreds after it was covered by several media outlets. The rally against rape demands better protection of women and strict punishment for those involved in the Sita Rai case. Furthermore, this protest has managed to bring forth many cases of women that have suffered from gender-based violence in Nepal. Saraswati Subedi, Bindu Thakur and Chorimaiya Maharjan have become household names at the protest site in Baluwatar. Their stories of suffering are encouraging more and more to occupy Baluwatar on a daily basis.

Reading and hearing about the tragedies of these women made a great impact to many. It was even more frustrating to know that the state which should safeguard its citizens was actually involved in a number of the mentioned cases. Questions remain unanswered but we knew we could not remain silent. A group of us gathered near the Embassy of Nepal on Friday January 11from 2PM onwards to show solidarity to the victims of gender based violence in Nepal. Furthermore, it was our attempt to put pressure onto the Government of Nepal by holding this static protest and handing over a letter of concern. Hundreds of voices chanting outside of Baluwatar not being heard did not stop us nor will the many more deaf ears in the days to come disperse our unity. For where there is a need to spread awareness, we aim to be. It is the least that we as people can do. Sometimes silence is not so golden and we do not want our silence to come across as an agreement to the suffering that these people have had to deal with.

Reducing rape does not happen simply by punishing the perpetrators. As people, we have to work together to empower the vulnerable sex. Have stronger women who are aware of their entitlements and rights, women that can independently practice authority and are not afraid of the opposite sex. Similarly, the path to a gender equal society should not leave men behind for it is the men that play a pivotal role. Men need to see women as an equal individual with access to rights, speech and authority. There is a huge need to reduce fear amongst each other. Coming from a deeply rooted patriarchal society, the journey to a gender-equal society is much tougher for us Nepalis, however many of us made our first step on the 11th January.

Together, let us take the next step forward. 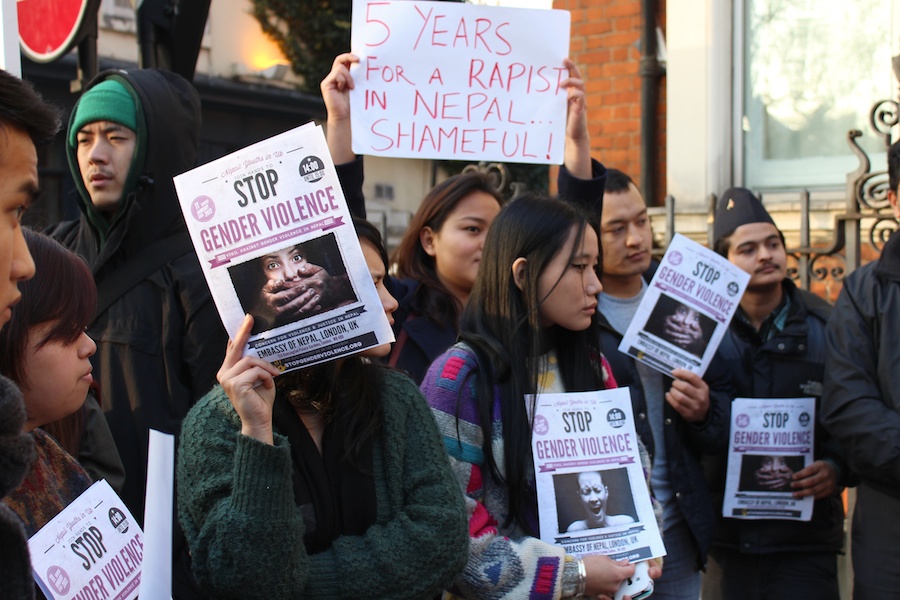 Huge thank you to Shreya, Laxmi, Gaumaya, Pradeep for initiating and leading this event on. Thank you to everyone that came.

Lex Limbuhttps://lexlimbu.com
Lex Limbu is a non-resident Nepali blogger based in the UK. YouTube videos is where he started initially followed by blogging. Join him on Facebook and follow him on Twitter.
Previous articleTHE BUNKER’S PARTY – 19 JANUARY
Next articleExhibition on The Gurkhas in Nuneaton