Great Reviews for The God of Carnage 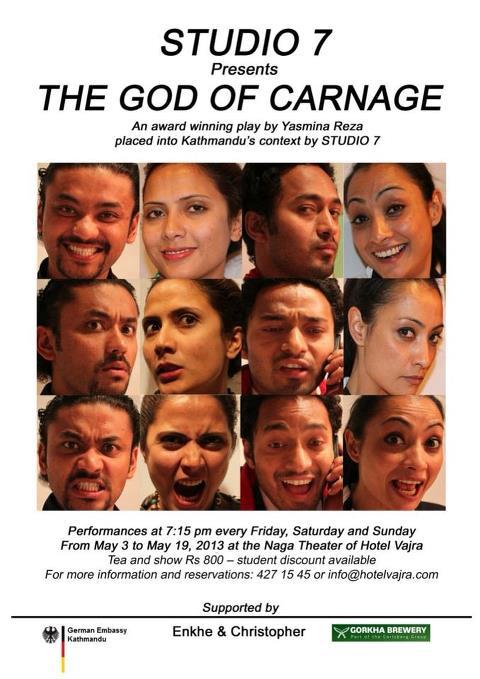 The God of Carnage, a popular Broadway play is currently playing at  the Naga Theater, Hotel Vajra until the 19th of May. The Nepali adaptation has a dream star cast with Jharna Bajracharya, Karma, Samuna KC and Subash Thapa. The reviews that are pouring in have nothing but positive remarks for the play and the actors. Catch the play from Friday to Sunday at 7.15PM, tickets are priced at Nrs 800. The hour and a half long play is apparently a guaranteed entertainer.

This is Studio 7’s first performance in which all the Nepali actors are talented professional film artistes. They are on stage for one-and-half hours without any breaks. Sabine Lehmann and Ludmilla Hungerhuber make cameo comic relief appearances. The God of Carnage is a must-see in this sweltering Kathmandu summer and is as real as the stench of the Bishnumati below. – Nepali Times

This production of the ‘The God of Carnage’ was a fully entertaining and thought-provoking act which was worked to perfection by the cast and crew. From the performance of the actors to the costumes to the sound effects, every detailed seemed to be thought out and executed perfectly. The about two-hours long play captivated the audience and managed to portray the life of the middle class in Kathmandu. – Republica

The actors in The God of Carnage do a stand-out job, and Karma in particular puts up an incredibly convincing performance. Humour too plays a significant role here—audiences are found laughing heartily and often. – The Kathmandu Post

Performance wise, all the actors will please you – they show a real flair of physical comedy. Bajracharya is quite good first as a reserved woman who has quality to turn furious when provoked. KC as irritatingly blunt person is okay while Thapa as a person with cruel attitude and lack of emotion is well portrayed… Karma will impress with his fluent dialogue delivery in English compared to others. The nearly an-hour-and-a-half long play with no interval is entertaining and humorous. – The Himalayan Times

Lex Limbuhttps://lexlimbu.com
Lex Limbu is a non-resident Nepali blogger based in the UK. YouTube videos is where he started initially followed by blogging. Join him on Facebook and follow him on Twitter.
Previous articleUniversal Religion Nepal 2013 – Photos
Next articleParamita Rana On WAVE Magazine!