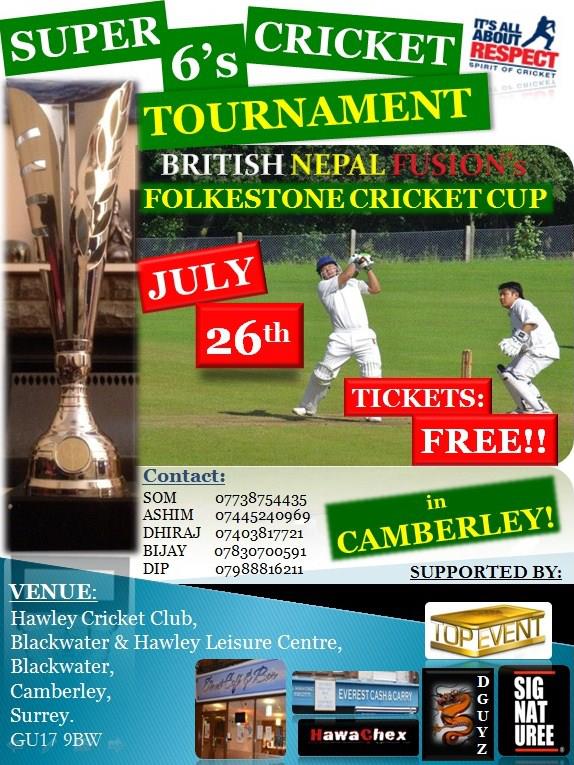 Six teams consisting of Nepali and British cricket players are all set to take part at the 3rd Cricket Cup organized by British Nepal Fusion on July 26 in Camberley’s Hawlay Cricket Club. The Cricket Cup which was founded by former Nepalese regional player Som Magar and Simon Wall in 2011 has taken place in Folkestone for the past two years. Apart from Som, the event will also include several former regional and national players from Nepal. National player Rajesh Pulami and former regional players Bidhan Shrestha and Manoj Gurung will also be taking part in the tournament.

This years event has been supported by Top Event UK, Signaturee Crew, HawaChex Entertainment, Everest Cafe and Bar, Everest Cash and Carry and Dragon Guyz. The winning team will go home with the shiny trophy and there will also be prizes for the Best Bowler and Best Batsman. If you love your sports or live nearby then don’t forget to head over to check out the cricket tournament, support the teams and try out the momos.

Lex Limbuhttps://lexlimbu.com
Lex Limbu is a non-resident Nepali blogger based in the UK. YouTube videos is where he started initially followed by blogging. Join him on Facebook and follow him on Twitter.
Previous articleDhangadhi And Narayanghat Experience TRENDSETTERS
Next articleSing With Sabin Rai in London