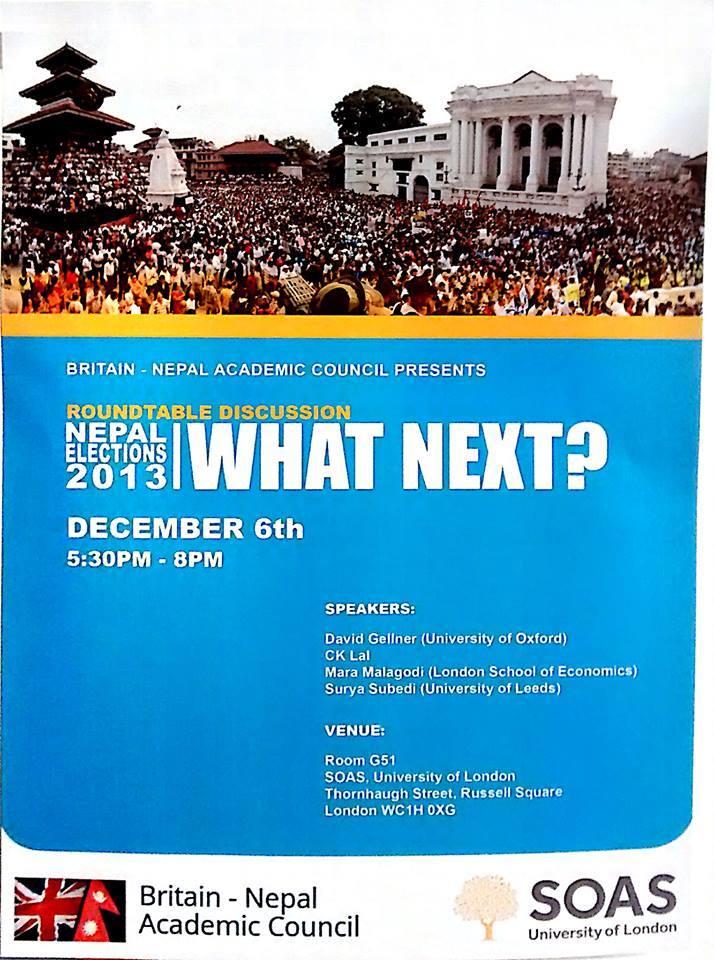 Everyone seems to have an opinion about the recent elections in Nepal and if you are one of the keen followers of Nepali politics or are wondering what everyone else is thinking then WHAT NEXT? is the event that you definitely need to make time for. The round table discussion about the recent Nepal elections has a starry list of speakers including the popular CK Lal, Surya Subedi (University of Leeds), Mara Malagodi (London School of Economics) and David Gellner (University of Oxford). The event by Britain – Nepal Academic Council takes place on Friday, Dec 6 at School of Oriental and African Studies (SOAS), University of London. Just to make it easier – head towards Russell Square tube station and then get your Google map out. No Nepali Timing here, be there for 5.30PM!

Nepal is gearing up to the elections of its second Constituent Assembly (CA). The polls are now scheduled to be held on Tuesday 19 November after having been postponed twice, in November 2012 and June 2013. Nepali voters this month will elect members to a unicameral assembly, which is deputed to function both as the country’s legislature and constitution-drafting body. It will again feature 601 seats allocated through a mixed electoral system. The success of the now faltering seven-year-long peace process entirely hinges on the country’s multiplying political groups finding a viable agreement, both inside and outside the CA, upon the drafting of the new constitution—the seventh in Nepal’s history.

Please join us to share thoughts on the elections, and what they mean for the future of Nepal.

Read More:
Rising With Nationalism by Polka Studio
What is a Bibeksheel Nepali?

Lex Limbuhttps://lexlimbu.com
Lex Limbu is a non-resident Nepali blogger based in the UK. YouTube videos is where he started initially followed by blogging. Join him on Facebook and follow him on Twitter.
Previous articleHollywood Actor Paul Walker Dies in Car Crash
Next articleRAGHAV – Nepali Film Poster