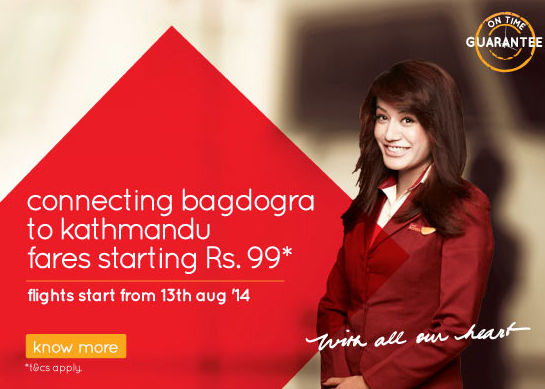 Wanted to visit Darjeeling, Kalimpong and the other hill towns but found it too far?

Well now you can thank Indian budget airline SpiceJet as they’ve recently announced direct flights between Kathmandu to Bagdogra. The airline will be operating the route on Mondays, Wednesdays and Fridays! Not only that but the airline is actually connecting Kathmandu to Kolkata via Bagdogra!

The first flight is set to take place on August 13 and SpiceJet has also announced for the first 1000 seats on the Bagdogra – Kathmandu route starting from INR 99 and return from Kathmandu at INR 199. Not too sure how their price is supposed to work out but when I checked for a return flight from KTM – BAGDOGRA – KTM for August end, it came to around NRS 9000 (return). It’s not cheap like INR 99 but still pretty good! Saves you flying to Bhadrapur airport and hiring a car to Darjeeling right?