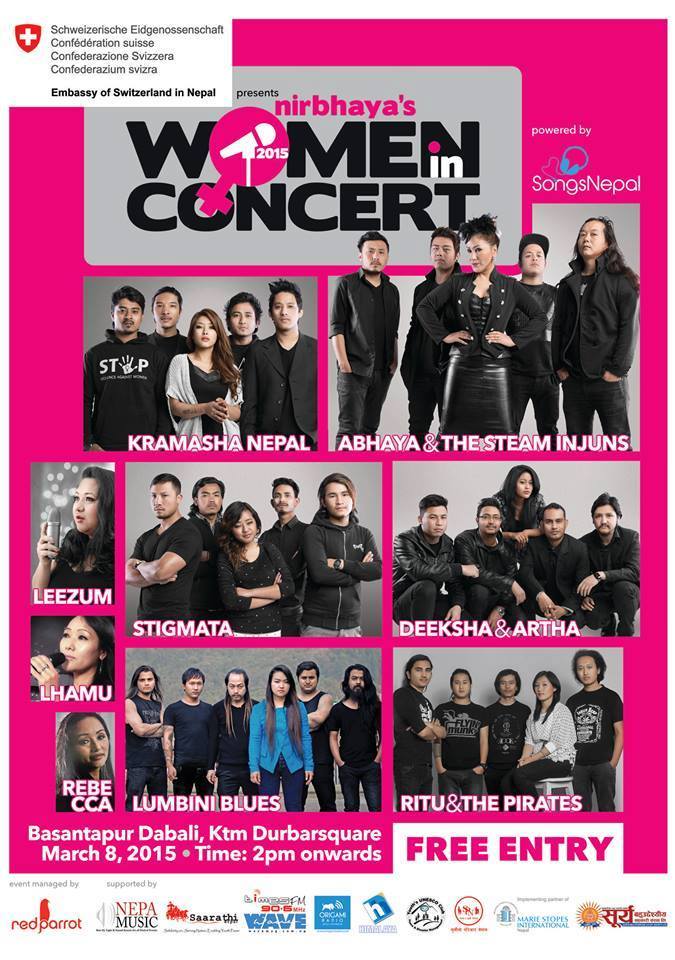 Women in Concert is back on Sunday 8th of March! The annual musical gig will take place in Basantapur from 2PM onwards. The concert which features women with bands from all over Nepal and even Sikkim will be celebrating the International Women’s Day with women who know how to rock! The gig is FREE for all and it also features ABHAYA AND THE STEAM INJUNS! The lead vocalist Abhaya Subba recently spoke to me about the upcoming concert gig, when quizzed about the positive outcome of Women in Concert from the previous years Abhaya answered:

“Look around you. You can hear female voices wafting late in the night at Thamel bars n pubs. There are more accommodating and inclusive male musicians now. Flashback to 2010 – one could hardly find bands that had female vocalists. Women in Concert has now become a collaborative project where the movement has had more and more progressive men who understand the problems women face on a day to day basis. The difference may not be devastatingly dramatic but talk to any musician touched by WIC – they are unafraid and not intimidated by women who know their minds.” Read the full interview here.

The concert on March 8th will have Malvika Subba as the host and will feature:

Lex Limbuhttps://lexlimbu.com
Lex Limbu is a non-resident Nepali blogger based in the UK. YouTube videos is where he started initially followed by blogging. Join him on Facebook and follow him on Twitter.
Previous articleSwayambhu Climbathon – The Temple Run on March 7!
Next articleAcid Attack Protest – The Scarf Movement in Basantapur