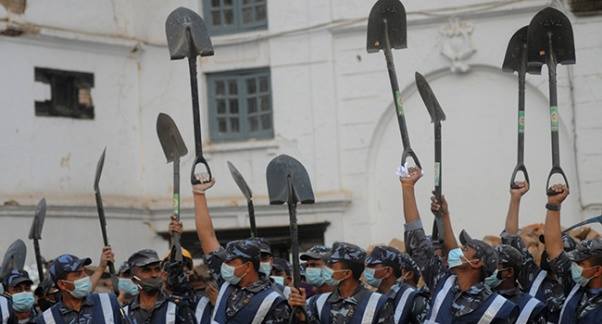 Our deepest condolences go toward the casualties and prayers for the speedy recovery to victims of this devastating earthquake. It gives us colossal pleasure to know time and again that Nepalese stand united during unprecedented difficult times. The exhilarating support from Nepalese abroad, foreign aid donors, external media and international community has been overwhelming. It’s premature to criticize the government’s effort of managing a natural disaster of such magnitude. The handling of enormous relief materials promptly to the righteous people and place is a daunting task for the country. Nevertheless, with optimism, unity and right leadership, we can utilize this disaster as an opportunity to create a new and better Nepal.

History confirms we have repeatedly stood up against unfavorable and aristocratic systems and when it comes to the issues of national sovereignty, we are indeed very sensitive. Nepal is one of the rare nine countries in the world never to be ruled by any outsiders. We exercise the determination to go against anyone that hurt our national sentiments. The twitter trend of #GoHomeIndianMedia due to the insensible Indian media coverage is an example. It’s a bitter disappointment if the claims of Indian media are true; our prime minister being informed of the earthquake through Narendra Modi’s tweet. What’s even more frustrating is the antagonism among political parties and the failed bureaucracy during this dire need. The government’s attempt of maintaining a single channel for relief distribution is understandable but lacking to take a prompt decision and delaying the management of relief supports is unacceptable. The challenge of delivering relief materials to many affected regions is the eventual price of failing to elect local representatives for the past 13 years. It’s hilarious how our current political leaders are already calling for a national government to prolong their existence. Our country needs a force that can understand the global world and close the gap of current system towards a better country.

Winston Churchill once said that democracy is the worst form of government expect all the others that have been tried. From the harsh Rana regime to Panchayat era to multiparty democracy to Gyanendra’s rule and the present republic rule, Nepal should be the favorite to experience the realism of this humorously ironic statement.  Nepal has witnessed and experienced many forms of failed governments. If there is any political party that needs to reminisce the period of unsuccessful governances, Nepali Congress has to remind itself of the majority governments it enjoyed in the last two decades. Twice, it had the authority, majority and the power to rule the government as a single party. The rest is history. Pushpa Kamal Dahal and Baburam Bhattarai both had the immense opportunity to direct the country into a new direction after their entrance into mainstream politics. However, it can be justified that they made a mockery of the decade long civil war and created a self trademark image, the former being a luxury obsessed and the latter being a cheap populist. United Marxist Leninist Party (UML) never had a clear agenda and thus never became the people’s party. Current politicians who rose protesting the Panchayat era and the new ones who come up through the highly politicized government educational system do not have the potential and capability to lead modern Nepal in a globalized world. Due to issues of constituent assembly, political instability, peace treaty and security, other significant factors like economic reforms, employment opportunities, development projects, and education seems a daydream for the Nepalese people. We need to embrace the vision of new Nepal that can only be achieved by long-term goals of economic reform and education. Economic reform maintains self-dependability and education brings awareness.

We have displayed national unity, endorsed harmony, shared our sorrow and exhibited positivity since the April 25th earthquake. The current essence is the treatment of earthquake victims, restoration of normal life, reconstruction of buildings, roads and rebuilding the damaged World Heritage sites. We undeniably hold the ultimate ability to handle our own problems without any foreign interference. Patience and optimism has been the answer of Nepalese people to overcome chaos in all these years. But too much optimism kills hope and too much patience brings repression. We need to think globally but act locally. A charismatic and a diplomatic leader that envisions a new Nepal is the current need of the country.

Lex Limbuhttps://lexlimbu.com
Lex Limbu is a non-resident Nepali blogger based in the UK. YouTube videos is where he started initially followed by blogging. Join him on Facebook and follow him on Twitter.
Previous articleDULLA SHOES : Fresh New Summer Collection
Next articleBack To Business For Kathmandu Cinemas!