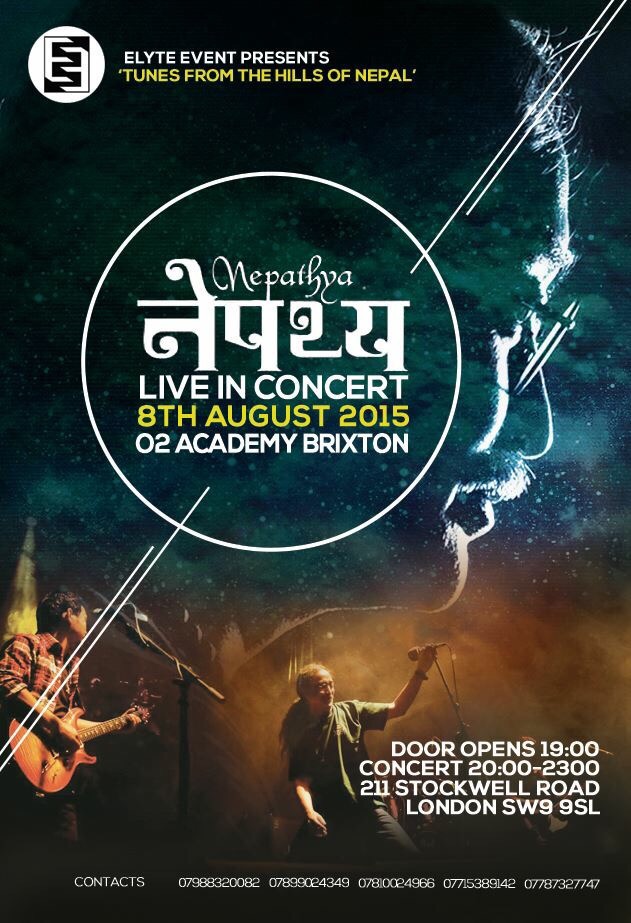 NEPATHYA, one of the most loved Nepali band will be making their return to London very soon!! Boasting countless hits from ‘Chekyo Chekyo’, ‘Yo Jindagani’, ‘Taal Ko Pani’ and ‘Resham’, the show is guaranteed to have you up on your feet and listening to the finest songs from Nepathya’s new album “Tunes From The Hills of Nepal” for the first time. Having created history by becoming the first Nepali band to perform at the Wembley Arena and simultaneously attracting thousands of fans from all over the UK – Nepathya is all set to do it once again at the o2 Academy in Brixton on Saturday, 8th of August.

The big night ahead is being organised by ELYE EVENT, the group behind the previous musical gig with Dibya Subba and Albatross. The event company has vowed to support Nepal earthquake relief efforts from the first two weeks of ticket sales. This event is open to those aged 8 and above, however anyone between 8-14 should be under the supervision of an adult (18 or over). Standing area is open to those that are 14 and above. For those wishing to extend the night further, there will be an after-party at the Electrix in Brixton.

Seeing Nepathya live has been one of my best live music experience and it’s amazing that I and so many others can have this opportunity again. If you’ve never been to a Nepathya gig then you have to get the tickets now!

Lex Limbuhttps://lexlimbu.com
Lex Limbu is a non-resident Nepali blogger based in the UK. YouTube videos is where he started initially followed by blogging. Join him on Facebook and follow him on Twitter.
Previous articleKay Dangol’s Win at Miami Pro Championship 2015!
Next articleFASHION : Moksha The New Me