There’s no denying that there’s a lot of people out there who hate and are not comfortable with the idea of two men being in love or having the right to marry one another. With the recent US Supreme Court ruling legalizing same-sex marriage, a lot of discussion has taken place between people of different communities and countries regarding where they stand and what their view is on this “hot topic”.

Being gay in Russia is a huge struggle – it has been clearly documented through several documentaries and heavily written about. Madonna and Lady Gaga have been warned (and banned from performing I believe) against promoting LGBTI rights in Russia during their live performances in the country.

ChebuRussiaTV on YouTube decided to do a social experiment with two men holding hands and walking through the city. Unsurprisingly, the two men receive a lot of stares and comments from people that pass by. Some even go out of their way to get in-between and attempt to create turmoil. It’s saddening how some people go out of their way to make things worse.

I wonder how such a social experiment would be if conducted in Nepal. I believe the two men would need to do a lot more since in Nepal, a lot of [straight] guys tend to hold hands anyway’… you get what I mean no? 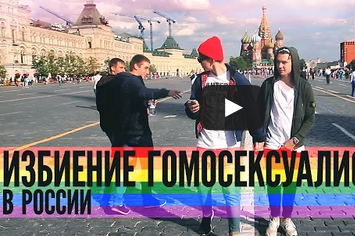 Lex Limbuhttps://lexlimbu.com
Lex Limbu is a non-resident Nepali blogger based in the UK. YouTube videos is where he started initially followed by blogging. Join him on Facebook and follow him on Twitter.
Previous articleQuote Of The Day
Next articleNew Trailer of HOSTEL RETURNS