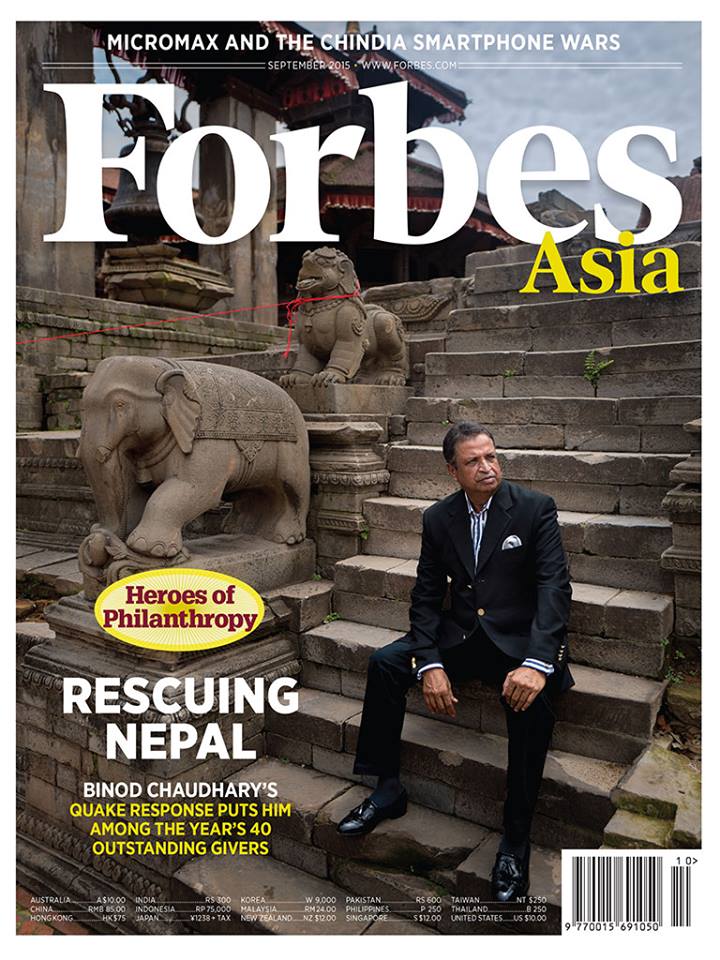 Nepal’s first billionaire Binod Chaudhary covers the September issue of FORBES Asia magazine! The magazine features the work of the billionaire and the Chaudhary Foundation during the time of the devastating earthquake. He also made it among the year’s 40 outstanding givers, a special mention for the ‘Heroes of Philanthropy’. The Chaudhary Foundation deserve a special shout-out for opening up their school grounds for shelter and providing Wai Wai, biscuits, water and medical supplies. In that critical time – those food for the people definitely helped!

Here’s an excerpt from the article:

“Since then Nepal’s first billionaire has pledged $2.5 million through his Chaudhary Foundation to restore schools and homes destroyed or damaged by the quake. The foundation will bear all the costs of building 1,000 transitional bamboo-and-plaster homes and is working with other donors to construct another 9,000.  By last month it had completed 300; the aim is to complete construction of 3,000 by October. On its own, the foundation also will rebuild or restore a total of 100 community primary schools in the 12 districts.” – Read the rest here.

Lex Limbuhttps://lexlimbu.com
Lex Limbu is a non-resident Nepali blogger based in the UK. YouTube videos is where he started initially followed by blogging. Join him on Facebook and follow him on Twitter.
Previous articleNepali Boy Receives Signed Jersey From Cristiano Ronaldo!
Next articleBack In The Ring : Surez Gurung