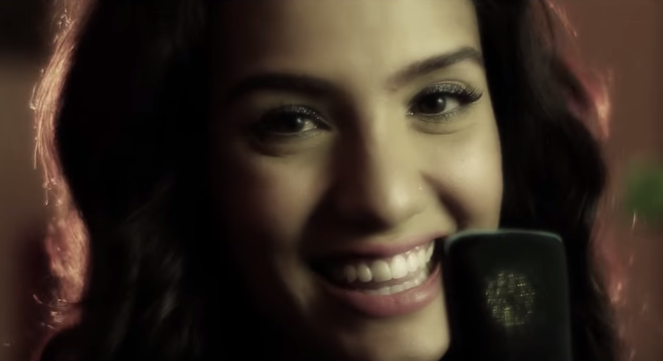 Reminding us once again that she is a force to be reckoned with – PRIYANKA KARKI has covered Timile Ta Hoina originally sung by Bachchu Kailash. The Suntali actress who is awaiting the release of Wada No. 6 released her cover version of Timile Ta Hoina through Call Kantipur on Kantipur TV. The video is now up on YouTube. It’s a simple video which focuses on the music and the supporting musicians. The video has been filmed at Coffee and Cupcakes in Bakundol, Lalitpur.

She sounds lovely! Very chirpy and bubbly in this version. What do you think? She has been teasing her followers with music for ages and it’s great to start hearing what she has been working on. Expect a music album by Priyanka in the near future; on that note, I just want her to be part of a clubby anthem like what Jennifer Lopez and Pitbull make! Lol!

When pop stars are made in the West, they normally have a product manager and so many people working in the team to make sure that the ‘singer/actor’ remains in sight of everybody.
Unsurprisingly, that’s not the case in Nepal but even midst the somewhat limited ‘industry’, Priyanka Karki certainly doubles up as her own social media manager, product manager, assistant as well as being an actor, dancer and singer. From billboards, newspapers, TV, cinemas, events to (now) – radio! There’s no escaping her and she’s the sole driving force of her own vehicle ‘Priyanka Karki’. Definitely admire her drive to the top!

PS. You can listen to the original here.