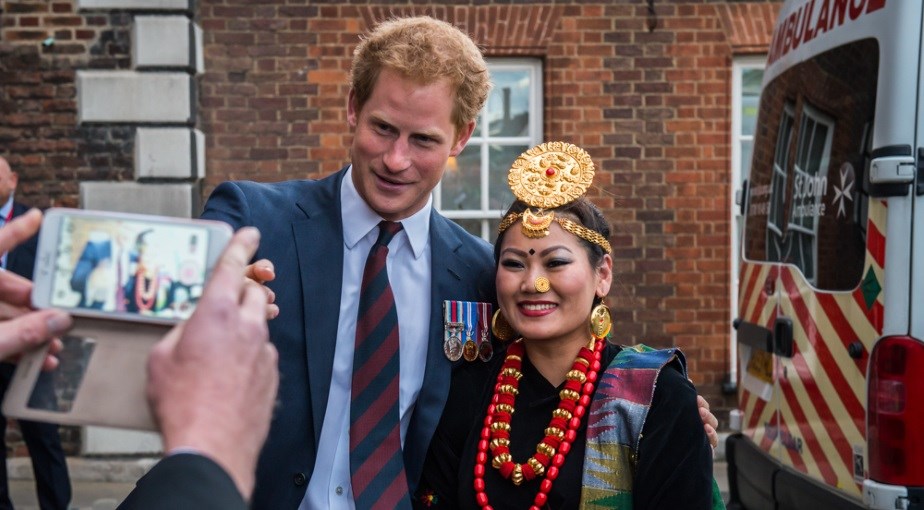 Details of Prince Harry‘s official tour to Nepal have been announced officially and it looks like it might be quite difficult to get a glimpse of the Royal as his schedule is jam-packed! Prince Harry will literally be showing us how much you can do in just 5 days. Maybe Kathmandu folks will get a glimpse of the Prince as he will be back and forth Patan, Bhaktapur, Kanti Hospital, Pokhara, Bardia and more! The list is endless. I’ve literally condensed his itinerary and highlighted the key details for your reading. Prince Harry will also be spending a night at a Gurkha homestay!

Love it! Going local! Of course, Prince Harry has worked with Gurkhas in the past and has been in the presence of the Gurkhas from a very young age. You can click here and read briefly about Prince Harry and the Gurkhas.

Such a packed schedule, looks like he won’t have time to hit up the bars in Thamel. Lol 😉

Saturday 19th March: Prince Harry will touch down in Kathmandu. He will attend a reception hosted by Foreign Minister Kamal Thapa in the evening and meet ministers and senior officials at the event. He will also call on the Nepali PM K.P. Oli.

Sunday 20th March: Prince Harry will meet President Bidya Devi Bhandari in the morning followed by a visit to the Patan Durbar Square, Golden Temple, meeting community members, visit to Bhaktapur and a temporary camp for displaced families by the earthquakes.

Monday 21st March: Prince Harry will head to Bardia National Park for a safari and rafting. His visit to Bardia will be followed by Pokhara where he will go on a mini-trek and meet Gurkha families through Gurkha Welfare Trust. He will be going backpacker style as he will spend the resort of the evening at a Gurkha homestay.

Tuesday 22nd March: After watching the sunrise, Harry will leave the village and visit a local secondary school. He will travel to the British Gurkhas Camp at Pokhara where he will take part in a wreath-laying ceremony to honor Gurkha soldiers killed in service to the Crown. He will also meet more Gurkhas during his time at the camp.

Wednesday 23rd March: In Kathmandu, Prince Harry will open the Nepal Girl Summit together with President Bidya Bhandari. Harry will also visit the Sano Thimi Technical School in Bhaktapur, a recipient of UK funding through DFID. After Sano Thimi, Harry will visit Kanti Children’s Hospital in Kathmandu. The tour will end with a reception at the UK Embassy in Kathmandu where the Prince will deliver a speech to the guests.

Lex Limbuhttps://lexlimbu.com
Lex Limbu is a non-resident Nepali blogger based in the UK. YouTube videos is where he started initially followed by blogging. Join him on Facebook and follow him on Twitter.
Previous articleSkiing in Nepal’s Himalayas
Next articlePrabal Gurung Prepares For Nepal Trip!