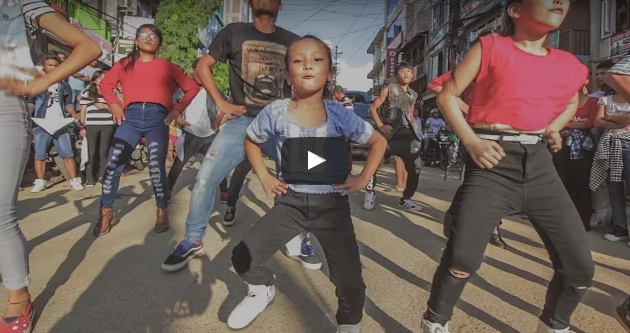 I don’t know which cave I’m living in because I only came across this Flash Mob by Step Up Dhading today (after it was shared by Nischal Basnet) and it is incredibly entertaining! The video which surfaced on YouTube on the 5th of October is a performance by the Step Up Dance Academy from Dhading Besi marking the National Children Day 2073. A troupe of young dancers took to the streets as they performed in popular songs such as Funtastic (Pani Paryo) to Siraima Sirbandi. I have to say that the little girl is such an ace dancer and what a delight it was to see her dance in Siraima Sirbandi.

A familiar name behind the camera and doing the editing work is the well known Sabin Karki (Beest) from the Cartoonz Crew. The concept and choreography is by Iman Tamang! What a gift this video was. So delightful! I’m not alone here as thousands have praised the dance video and director Nischal Basnet shared “This little gir’l’s dance made my day.Young talents WOW. This video and the effort by The Step Up Dance Academy Dhading Besi deserves a watch and a share as well”.