Welcome The New Year With Karma Band And Sanjay Shrestha In Sydney!

Ho Ra Hoina Hola Events’ upcoming Nepalese New Years Eve party will see a reunited KARMA BAND and SANJAY SHRESTHA performing at the Space Nightclub in Shark Hotel, Sydney. The Australia based event company are also marking their fifth anniversary on the 13th of April. The musicians Sydney date marking the Nepalese New Year is part of a wider Australia tour where they will perform in Adelaide, Brisbane, Tasmania, Melbourne and Darwin.

Sanjay Shrestha, the voice behind the songs Maya Meri Maya and Tadha Najai Deu Timi will take you back into an era of Nepali songs that some of you may have grown up listening to. It will be a nostalgic night of live Nepali music as Karma Band belt out their hits from Kaha Hola Ghara Bara to Hukka Mero.

Early bird tickets for the event are currently priced at $15 only and you can purchase it online. The early bird sale offer will only be valid till the end of March. For group tickets and other queries, you can get in touch with the team via Facebook or the contact number on the poster below. Presale tickets will be $25 with door sale at $35. Make sure you get the early bird and spend the difference on drinks or something else! 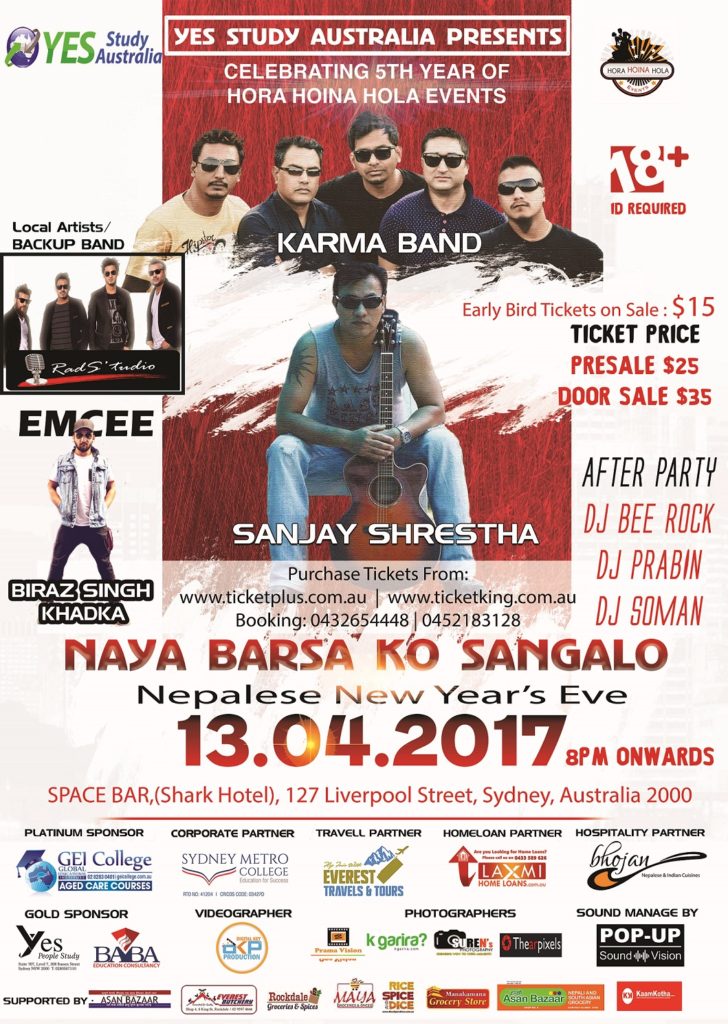 The live music from Sanjay Shrestha and Karma Band will be followed by an after-party with DJ Bee Rock, DJ Prabin and DJ Soman.

Ho Ra Hoina Hola Events have successfully hosted several events in the past including a concert/party with THE UNITY featuring Asif Shah, Aidray and Sudin Pokharel and B8EIGHT.

Lex Limbuhttps://lexlimbu.com
Lex Limbu is a non-resident Nepali blogger based in the UK. YouTube videos is where he started initially followed by blogging. Join him on Facebook and follow him on Twitter.
Previous articlePrince Harry Attends Nepal Bicentennial Reception At Nepal Embassy London
Next articleThe Video To Show Your Friends To Visit Nepal