Under Water – HOW YOU CAN HELP

Heavy monsoon rainfall in the past few days has led to many towns and cities being under water in Nepal. The rainfall has also triggered several landslides along different roadways, led to a major bridge along the East-West highway to sink and all of these devastation has already taken the lives of over 40 people across the country. Photos of Biratnagar Airport and the new Shree Airlines completely flooded and destruction of livelihoods and communities are sweeping across our timelines right now.

Many active citizens have been putting their heads together and asking what they can do to help others in the flood-hit areas. With access to the areas limited due to poor roadways and flight cancellations, people have been actively seeking organisations and individuals from the areas so they can establish relations to address their needs. Active social media user and businessman Shree Gurung wrote on Facebook earlier today “Dear friends Since there are no access of roads or flights to flood hit zones, let’s focus on collecting money from our own circle and support the local volunteers by sending money to nearby cities (Dharan, Chitwan, Butwal and many other nearby towns) via banks/IMEs to buy the most required items. (Note: I will be collecting money and if you trust me you can personally handover to me. You can also copy and put this as your status)
P.S. starting from myself Rs 20,000)”.

Founder of Carpool Kathmandu, Sumana Shrestha has also been actively seeking ways to manage volunteers, required resources and logistics. Her detailed Facebook post is a great destination for those wishing to help or to see how they can best utilise their skills and strength during this time.

Similarly, the very well known story sharing platform Stories of Nepal also shared their flood appeal where you can find more detail through the poster below. 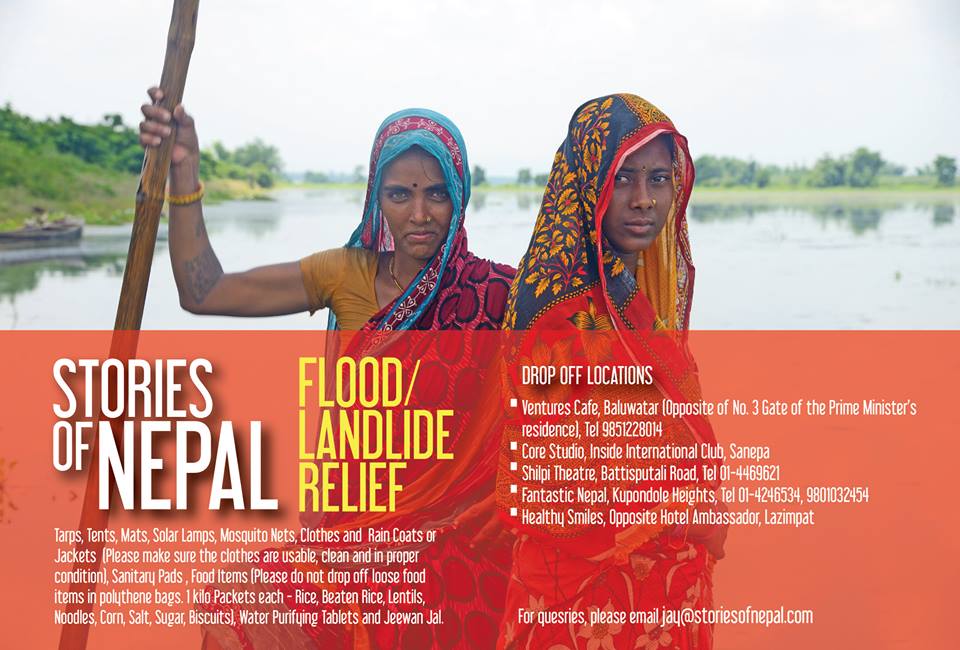 Lex Limbuhttps://lexlimbu.com
Lex Limbu is a non-resident Nepali blogger based in the UK. YouTube videos is where he started initially followed by blogging. Join him on Facebook and follow him on Twitter.
Previous articleNepal Criminalises Age-Old Practice Of Chaupadi
Next articleJay Author Teases Video For JUICE X BACARDI