The King of Pop’s birthday is tomorrow! I’m writing about the one and only, Michael Jackson. The superstar continues to be remembered and celebrated in Nepal by the Michael Jackson Memorial Fan Club and Heal The World Trust. The group will be organising a ‘TRIBUTE TO MICHAEL JACKSON’ concert tomorrow at the Rolling Stones Rock Bar in Lakeside on Thursday evening, August 29th.

The singer would be 61 tomorrow. His music and legacy continues to live and unsurprisingly, a lot of revelations about Jacksons life continues to surface even now. The tribute concert will celebrate the best of Michael Jackson through his countless hits. Nepali rock band Abhaya and The Steam Engines will be performing live in Pokhara at the tribute concert, marking the birthday of the pop icon. You can’t call it a MJ themed event without dancing! Dancers Subash Shahi and B2D will be dancing in Michael Jackson hits. I bet they’re guaranteed to keep people entertained and attempt their own version of the moonwalk! Iconic! 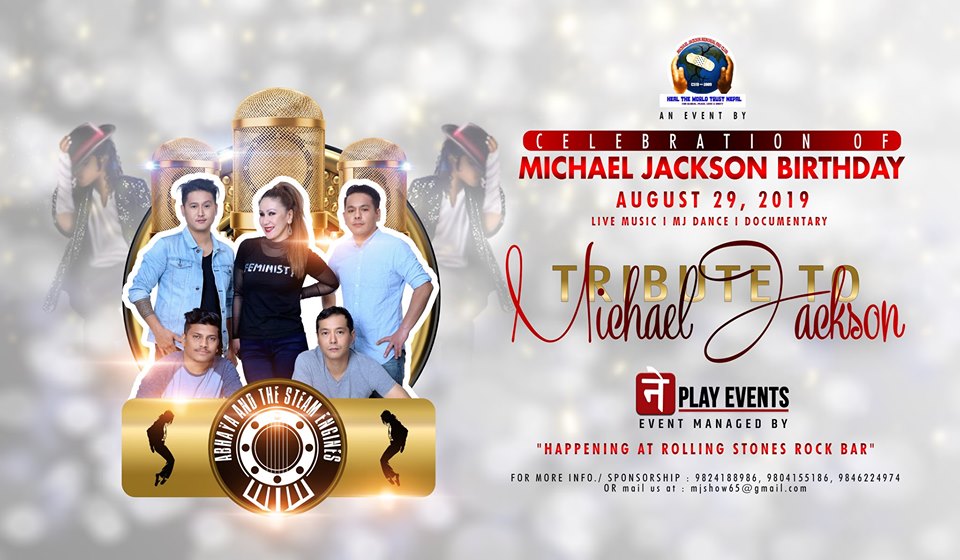 The Michael Jackson fan club will cut a cake marking the singers 61st birthday and unsurprisingly, there will be an after-party. What would be super fun is – people dressing up as their favourite Michael Jackson videos. Imagine how many would pick to be MJ from Thriller. That’s certainly my go-to MJ style! I mean, there are so many!!

The incredible thing about the Michael Jackson Fan Club, based in Pokhara is that a lot of their events and activities are fundraisers to support various projects and educational programs. The group was established in 2009. The Michael Jackson tribute event is raising funds to support a school in Gorkha. When I get more information from the outcome of the event, I will share it via the blog.

Lex Limbuhttps://lexlimbu.com
Lex Limbu is a non-resident Nepali blogger based in the UK. YouTube videos is where he started initially followed by blogging. Join him on Facebook and follow him on Twitter.
Previous articleA New Take on Women Empowerment
Next articleNepali Girls Dance To BTS’s BOY WITH LUV