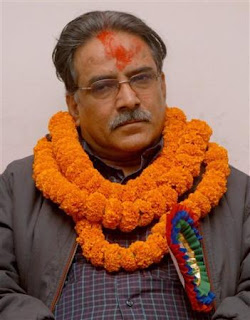 The Maoists have taken responsibility for the death of Birendra Shah. Birendra Shah who is a journalist had been missing for quite a while but it was only after the Journalists community decided to investigate the case that Prachanda met with Shah’s bereaved family and told them this would be investigated upon. I know that Prachanda may have not wanted this but why is he flipping letting his team go outta boundaries. This is unnacceptable, so many times theyve commited heinous crimes (for the past 9 years) and all they can say is ”SORRY”. They even threatened to quit the peace process.
To be honest I just find it disgusting that for nearly a decade they tortured innocent people, took away lands, and wrecked peoples lives but we THE NEPALI CITIZENS decided to welcome them in the GOVERNMENT which is just DISGUSTING. Since then they have expressed their requests and everything and they this country wanted DEMOCRACY and DEMOCRACY WE GOT. Then why do Journalists still hesitate to write negative stories about the Moaists ? Democracy means we have freedom of speech and will so therefore whatever we write about Moaists is taken in our opinion but we know that Maoists only want good things written about them. Maoists leaders get treated like Royalty but do they really deserve this?
They should wake up and they should start sorting their priorities, because they always go on about ‘whats best for the People’. They clearly cant see that it is them who are hurting their own PEOPLE.