Lex Limbu
January 18, 2010
Share
Facebook
Twitter
Pinterest
WhatsApp
Third Gender, I always get confused regarding what makes a person third gender, are they simply just transexxuals? Well, statistics prove and from what Blue Diamond Society say; there are a sizeable amount of transgender people living in Nepal. One would think that its only in the urban areas such as Kathmandu, Biratnagar and Pokhara where third genders live, however shocking figures suggests that theres many transgender people living in the rural parts. 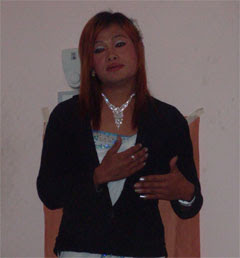 Shreeya Gurung; she was born a male but with time she realised that she was the opposite sex deep down inside. Coming from a rural town; Syangja, she recieved no help from her family or the people around her. Now, Shreeya has moved to Pokhara in hope for a better life and acceptance by people yet there are still hurdles along the way.
“The police refused to believe when I declared that I am a third gender three years ago. They said no one in Pokhara can be a third gender and threatened me to leave Pokhara in a night believing that I must have come from India,” Gautam said.
The Nepali Society should accept these people, if you want a reason then my reason is WHY NOT? Nepali culture already has so much diversity regarding sexuality as clearly seen by the celebrations held during Gai Jatra and many other festivals where men dress up as a women and dance around (Marunis). If these are acceptable then why arent third genders?

Lex Limbuhttps://lexlimbu.com
Lex Limbu is a non-resident Nepali blogger based in the UK. YouTube videos is where he started initially followed by blogging. Join him on Facebook and follow him on Twitter.
Previous articleEmma Watson With People Tree
Next articleMiss Nepal – The Language Issue