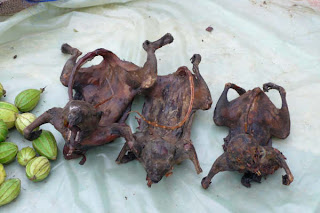 Dr Om Gurung, who is currently heading a government-formed taskforce to make a list of indigenous nationalities, and not on the Nepal Tourism 2011 Board as far as I know. He was recently quoted in the The Kathmandu Post:

“If people can be tempted to taste frog-meat served in a five star hotel in Paris, they would definitely be interested to taste the rats in Nepal. I am sure this could make it to a five-star hotel menu if marketed properly, as the frogs do.”

He should steer clear from making such remarks in the future; speak about your area of expertise and leave the rest for others to handle. Urgh Rat Dinners? so not do-able.
Source

Lex Limbuhttps://lexlimbu.com
Lex Limbu is a non-resident Nepali blogger based in the UK. YouTube videos is where he started initially followed by blogging. Join him on Facebook and follow him on Twitter.
Previous articleVote Because You Can!
Next articleNew Writer on lexlimbu