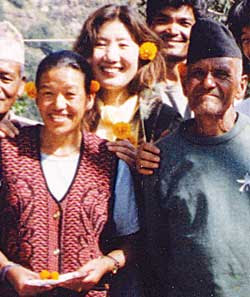 I
Chandra Kumari Gurung went to Korea to work as a labourer in 1992, a healthy and excited woman nearing 40. In 1993, she disappeared. A meal Chandra Kumari couldn’t pay for was the start of the nightmarish six years and four months that this normal, balanced Nepali woman spent in Korea’s national psychiatric hospital.After her release, Chandra Kumari, with the help of angry South Koreans, sued the Republic of Korea and Dong-san Jang, director of the Chung-ryang-ri mental hospital. “Because of the carelessness of the Korean police and state, she ended up in the hospital, where she had no business being,” said Choi, who is also vice-president of Nature Trail, the Korean NGO that helped Chandra return home on 14 June, 2000.
Throughout her stay in the psychiatric hospital, Chandra Kumari was kept alone in a room. A doctor there familiar with Nepal met her, and contacted Lee Geun Hoo, a member of Nature Trail and founder of the Yeti Caf? in Seoul. Lee, a professor who has been coming to Nepal regularly for 15 years, visited the hospital. The story was publicised by Nature Trail, and created an uproar in Korea.

Soon after her release from the hospital in April 2000 Korean lawyer Suk-tae Lee helped Chandra file a lawsuit demanding compensation for her incarceration, and a formal apology from the South Korean state. The court arrived at a ruling 5 November, and awarded Chandra just over $23,500. Choi says the amount is insulting, and that NGOs and Chandra’s lawyer are preparing to appeal. “Still, no amount of money can ever right the wrong that the Korean state committed against Chandra,” Choi told us when in Nepal last month to hand over money that the Korean public has donated to Chandra.

Source: Nepali Times
Its truly saddenng that this normal stable woman had to go through such a long ordeal due to the lack of proper handling of the situation by certain figures of the state department in South Korea.Thank You to Sakahari for sharing this video with me, the video below is by the popular Korean director Park-Chan Wook. If You Were Me is a 2003 South Korean omnibus film, comprising six short films. This is the last story N.E.P.A.L. A must-watch.