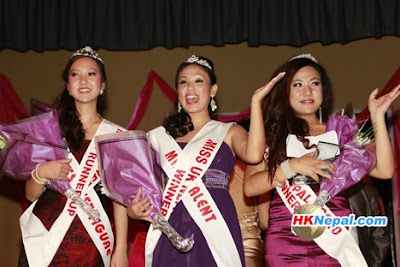 L-R: 1st Runner Up Sheila Shraddha Limbu, Winner Nabina Gurung, 2nd Runner Up Monica Limbu
22 Year old Nabina Gurung took home the crown yesterday evening from the very first Miss UK Nepal 2010. Nabina who has only been in the UK for 7 months may not have been the viewers favourite but she fought against all odds firing perfect nearly scripted answers back to the judges. Aside from bagging the title and a cheque worth £800, Nabina also took the Miss Talent title for her performance of ”Driver Dai”.
Coming close was 1st Runner Up Sheila Shraddha Limbu who also took home the title of Miss Best Figure.
Lastly Monica Limbu not only became the 2nd Runner Up but also won the judges over as she was handed over the Miss Personality title.
I hope this new platform provides these 13 individuals great opportunities in the future. Failure is a part of success, success is a part of failure. Heads high, Walk on girls. The show was packed, the organisers were probably overwhelmed…I certainly was. With no space to sit or stand and tickets being sold like theres no tommorow. Better organisation is a priority for next years event. Also, I thought it was very unprofessional of the host Laxmi Rai and judge Fattajee to have a public bitchy attacks(comments) to each other due to the host getting the judges name wrong. Suck it up guys! Y’all are old enough. The event dragged with too many performances… This would not have been possible without Sabrina Shrestha and Shanti Gurung; well done to these two hard working women. Himal Bhujel and Preeti Subba looked the ideal hosts. Definitely get them on for next year. What started off as a joke for the Nepali youth in the UK turned out to become the biggest sell out Nepali event.
Girls, if you have that drive and determination.
Get practising for Miss UK NEPAL 2011.
Bigger and Better!

Lex Limbuhttps://lexlimbu.com
Lex Limbu is a non-resident Nepali blogger based in the UK. YouTube videos is where he started initially followed by blogging. Join him on Facebook and follow him on Twitter.
Previous articleBecareful Nepali Facebookers
Next articleSAY YES to TopEvent UK