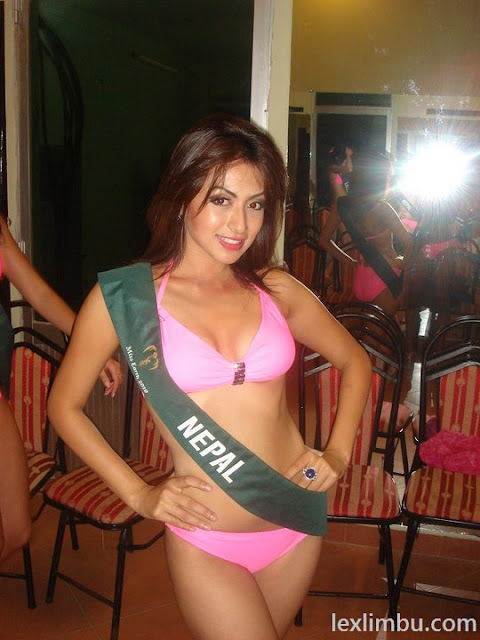 Sahana Bajracharya is someone who has established herself in Nepal’s showbiz circuit well in a short span of time. Graced with exotic features Miss Bajracharya can often be seen plastered across newspapers and billboards modelling various jewellery to electronic items. Her participation in Miss Nepal 2010 was her second attempt and she gained victory by bringing the First Runner-Up crown home. Through this interview I have explored as to why she decided to participate in Miss Nepal given that she was already getting somewhere and if her status or links could have put her at an advantage in comparison to her competitors. Fresh from her return from Vietnam after representing Nepal at Miss Earth, Sahana created an online-buzz after pictures of her in a bikini surfaced online. I am confident that my readers will agree with me when I say she is undoubtedly the best Miss Nepal with THE BIKINI BODY.
Nonetheless, she proves to us that she is not just a pretty face. Sahana has set her aims high; with upcoming projects to promote domestic tourism in Nepal this beauty queen may not only be beautiful 😉
Firstly, Congrats for Miss Nepal 1st Runner Up win and representing Nepal at Miss Earth, to sum it up what has the been the highlights so far and what have you yet to experience? Thank you team Nepunity! I believe, being a part of Miss Nepal in itself is an experience that takes a woman to a different level of maturity. I was a part of Miss Nepal in 2008 but unfortunately, the pageant intercepted due to fierce protest from various women activist groups. Everyday, there was something to learn and it prepared me for who and where I am today. My first venture in media also commenced here as Dabur Special Light Hair Oil endorsed me as their brand ambassador.

In 2010, being crowned Miss Nepal First Runner Up brought in more opportunites to learn more experiences, live my crown and interact with prominent personalities. (I was one of the very few people who got an opportunity to meet The NASA Administrator, Charles F. Bolden 🙂
The Crown keeps unfolding interesting events my way and I really dont know what I have yet to experience. 🙂

Coming back to Miss Nepal, even before the pageant you were already a familiar face in the media circuit. Do you feel as if you had an unfair advantage in comparison to the other contestants?Being a familiar face in the media has nothing much to do with the competition. As we enter our training hall, we are all treated the same. We get the same grooming and the equal training. But outside the training hall, to the audience and the media, to be honest, I suppose I did. I might have got a little more preferance and coverage but again, at the end of the day, it was “ME”, all by myself, who had to fight the competition. Being a familiar face is actually a burden as you have more hopes on you and it kind of builds a pressure, which isn’t an advantage but definitely unfair, to the person.

So what was the key factor behind an already well known media personality competing for the coveted Miss Nepal title?I still wanted to be Miss Nepal, when I was’nt a known face back in 2008. Ever since I’ve known the pageant and that every year I watched it on television, I WANTED to be there. The fame did not attract me to the Crown, but the “Change” that this Crown brought. I saw how our Miss Nepals, all of them so far, proved themselves , as not only a beautiful face, but a beauty with a purpose, a woman of substance and I knew I had it all and wanted the transformation it could bring. And not to forget , every year the crown gets better and better, you just WANT it!!!

Out of Sadichha, Sanyukta and you, you undoubtedly looked as if you had the better preparation; your gowns, grooming and body was brilliant. Would you agree that your status helped you gain this treatment?Preparation is a must in any sort of competition and yes, I did prepare myself for Miss Nepal. Because, even if I didnt win I still wouldnt regret, because I gave my best. I read a lot, I updated myself on every topic, from politics to prices of vegetables. Physically, I did not let my laziness take over me at the gym. I would actually imagine that crown and run an extra kilometer. But once in the competition, as I said earlier, we are all treated the same. Our gowns for the finale too was chosen by our designer and choreographer.
A little story on my gown. Night before the finale, on our final trial for our gown, mine was the only gown which was a complete disaster. It looked like a borrowed nighty from my aunty. I embarrased myself by bursting into tears infront of everyone that night. But Im gald it looked good on the fianle.

More than being a media personality, my work experience was a bonus point. I was a host for a talk show, Yugantar, on Image Channel, where I interviewed, women from all fields from politicians to activists, which definitely broadened by knowledge,boosted my confidence on screen and built up my personality.

You’ve completed the main duty by going to Miss Earth, is there anything left for you to do?Yes, my main duty, that came along the crown, representation in Miss Earth 2010 is complete but my reponsibility towards the society will never end, even after I crown the next Miss Nepal Earth.
This title is a benefit to my name and I will make the best out of it. I am already working on my first documentary on Chhaupadi- A custom of forced isolation for women menstruating in West Nepal. Every year, number of girls and women lose their lives due to low hygiene and snake bites due to the isolation. This is so far the most challenging project so far in my life as I myself will be experiencing the tradition and village life. I will start shooting in February 2011.

For the future Miss Nepal hopefuls what do you think they should be aware of before competing in such a national pageant?A lot of girls who apply or wish to apply for Miss Nepal think that it is only about having a pretty face and a good height. Yes, pretty face, to some extent is important , after all its a beauty pageant but it not just that.

Miss Nepal is a represenation of all the women of Nepal and most importantly, our country. So read a lot, make yourself aware on issues, it helps you grow and build interesting conversations with people.
Learn about your country and countrymen and feel pride in being a Nepali because you will get a life time opportunity to represent your nation to the world in international beauty pageants. Please do start working out atleast 3 months before you enter the pageant. If you want to look good, you will have to go through a little hardship. And most important of all, start building a positive attitude and be comfortable in the person you are!

Who is your favourite Miss Nepal till date?Miss Nepal 2009, Zenisha Moktan. Partly because she is my best friend but because she is my best friend I know her very well as a person and she is beautiful inside out. She has carried her duties remarkably well and as I mentioned earlier that my responsibility as the title holder will not end with my tenure, so hasnt for Zenisha aswell. She established a project under the name “Project Muskaan”, during her reign where she conducted health camps and raised funds for the school children in Rasuwa. She is still going strong with her project as we are organizing a fund raiser to build toilets in one of the rural villages of Sindhupalchowk. Enough reasons to have her as my favourite Miss Nepal!

What can we expect from Sahana on IMAGE TV in the coming days?I am no more with Image Channel but definitelty I will be back very soon on television with a travel show. I will be exploring 15 new destinations in Nepal with a motive to promote ethnic communites, their cultures and cusines and domestic tourism. This will be my next venture and my contribution to Nepal Toursim Year 2011, as an individual.

What would you like to achieve in 2011?I have actually sorted out my To-Do list for the year 2011. It will be all about chasing my dreams of making documentaries and working for underprivilidged women and children. Also, melting of Himalayas due to climate change has also caught my interest, so definitely something in the field of environment too. And a little for myself, more makeups and hopefully some Choo’s :).

Finally, thank you for your time. Any last words for lexlimbu.com surfers?If you could finish reading my interview, then WOW you guys have great patience. Thankyou for supporting me and liking my work so far. Much love !!!

I wake up at: Any hour. Depends on my mood, schedule and the night before 😉
On a Friday night: I catch up with my social life and update to city gossips.
Jharana Bajracharya is: NOT my sister nor are we related. If we were, I would have her dusky beauty too. She is one of the finest actresses in Nepal.
The Nepali guy with the fittest body is: …………! This question actually caused quite a stir among my guy friends..But I couldnt come up with one single name. I realized there are so many and I didnt want to break hearts by naming just one 😉

Sahana Bajracharya is: fearfully and wonderfully made..♥

Lex Limbuhttps://lexlimbu.com
Lex Limbu is a non-resident Nepali blogger based in the UK. YouTube videos is where he started initially followed by blogging. Join him on Facebook and follow him on Twitter.
Previous articleMachine Readable Passports
Next articleNew Year with Good News!